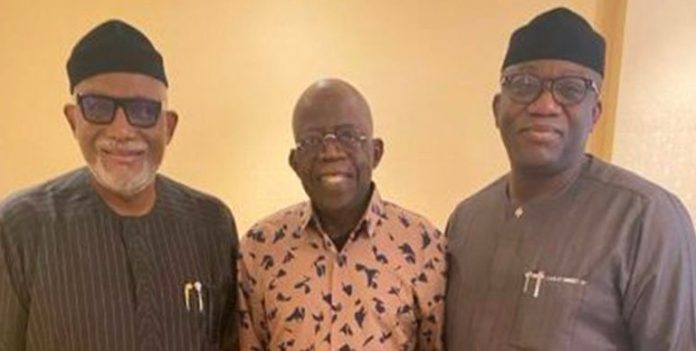 The Governor of Ondo State, Mr Rotimi Akeredolu, has said his visit to a former Lagos State Governor and National Leader of the All Progressives Congress, Asiwaju Bola Tinubu, has nothing to do with the 2023 election.

He said he was in London to see Tinubu and he was sure that the rumours flying around on the social media was not true.

The governor gave the explanation on his London trip while speaking on a monitored Arise TV programme, on Sunday.

Akeredolu, who described the former Lagos State Governor as the capon in the South, said he (Tinubu ) was expected to return to the country soon, so as to meet with him and be able to take certain critical decisions.

Asked if he will support Tinubu as the presidential candidate of the party in 2023, Akeredolu said, “APC is a party. APC will decide who the candidate will be. I have said it several times. I’m going no where. If I leave APC, I am going back to my chamber. For me, whatever APC decides, I will follow.

“We went to London because it was important for us to go and see for ourselves. How he’s doing. He’s the capon for us here. But the time he comes, we can make some serious decisions.”

We Bombed The Heart of Sambisa Forest, Killed Many Boko Haram...