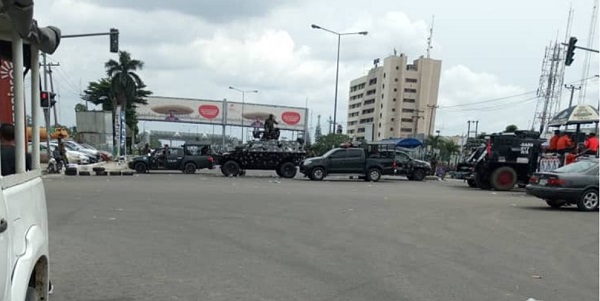 The Independent National Electoral Commission has suspended the governorship and House of Assembly elections elections in Rivers State till further notice.

The commission premised its action on some factors, including the widespread disruption of elections and violence in Polling Units and Collation Centres.

INEC has therefore set up a fact-finding committee to assess the situation and report back within 48 hours.

A statement issued on Sunday by INEC National Commissioner and chairman of its Information and Voter Education Committee, Festus Okoye, said while the Commission’s staff have been taken hostage, materials including result sheets have either been seized or destroyed by unauthorised persons.

The statement reads: “Based on reports from our officials in the field, the Independent National Electoral Commission has determined that there has been widespread disruption of elections conducted on March 9 2019 in Rivers State.

“These initial reports suggest that violence occurred in a substantial number of polling units and collation centres, staff have been taken hostage and materials including result sheets have either been seized or destroyed by unauthorized persons.

“In addition, safety of our staff appears to be in jeopardy all over the state and the commission is concerned about the credibility of the process.

“Consequently, at a meeting held today (Sunday) March 10 2019, the commission has decided to suspend all electoral processes in the state until further notice.

“This is in line with Section 26 of the Electoral Act, 2010 (as amended) and Clause 47(e) of the regulations and guidelines of the commission.

“The commission has also established a fact-finding committee to assess the situation and report back within 48 hours.

READ ALSO:  Bauchi CP Reveals What Will Happen To DPOs Who Fail To Hang IG's Portrait In Their Officers

“We appeal to the people of Rivers State, particularly the voters, for their understanding as we look into the circumstances of these disruptions and what further action needs to be taken.”

Meanwhile, there was a clash between soldiers and policemen at the main gate of the headquarters of the Independent National Electoral Commission in Port Harcourt.

Though the reason for the disagreement was not clear because most journalists were barred from entering the place by soldiers, it was gathered that the soldiers wanted to take over the manning of the gate, a decision that was said to have been resisted by the police.

Many persons, including journalists, who were close to the INEC office gate left immediately, to avoid choking as a result of the teargas that was shot into the air by the police at a point.

However, as of 1.55pm, collation of election results has not begun at the collation centre inside the INEC office.

It was learnt that INEC had insisted that collation would not commence with the heavy presence of soldiers within its premises.

Currently all four lanes of the Port Harcourt-Aba expressway has been blocked from the GRA junction to Waterlines near the INEC office.

Why Federal Government Will Continue To Feed School Children Despite Closure...

Eden Hazard Reveals How He Saved Kante With His Stunning Winner...

Third Mainland Bridge: No Cause For Alarm – FG Assures Nigerians