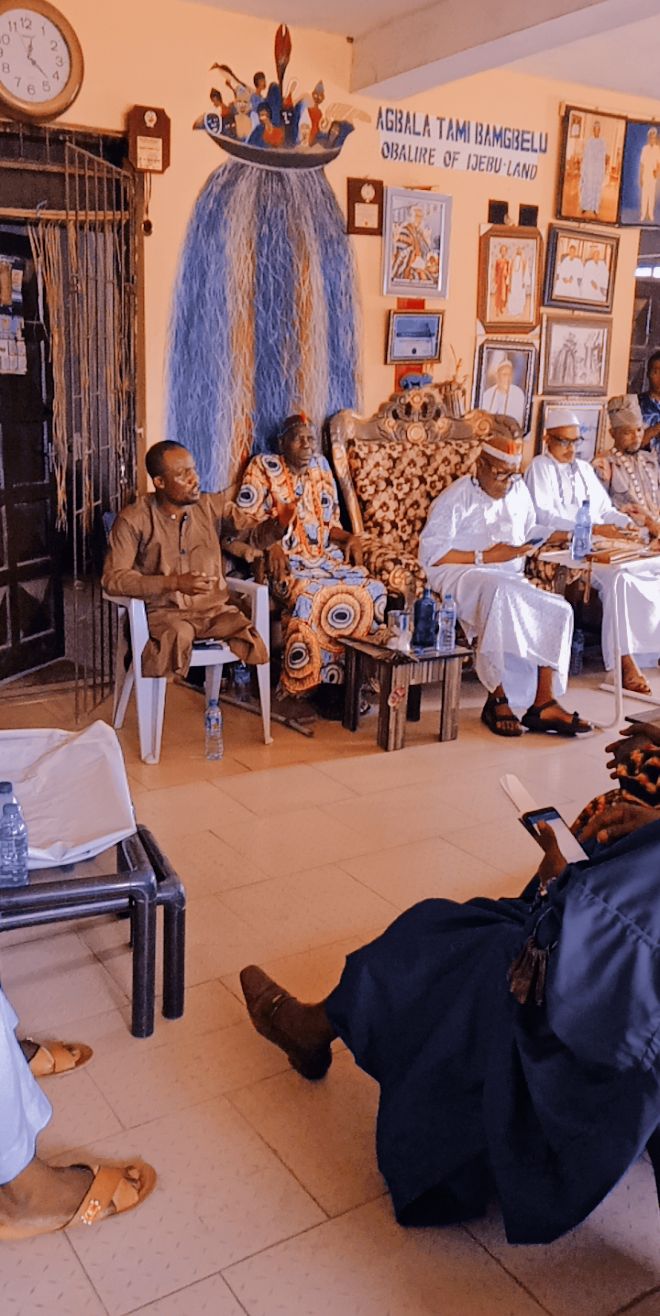 Part of the crisis threatening peace in Nigeria and probably, all over the world is the struggle over land and natural resources. This crisis is rooted in a series of structural, historical, and socioeconomic factors. It is also driven by increasing urbanization, land-grabbing, demographic pressure, inadequate property rights, and conflicting land tenure systems. In this write-up, we examines the ongoing efforts by Celebrity City Estate as one of the major players of real estate industry in Nigeria, to curb the activities of a set of conflict actors locally referred to as Omo Onile (sons of the original landowners), who assert ownership of land based on their autochthony to Lagos and other states of the country.

The Managing Director of Celebrity City Estate, Prince Adewale Morenikeji Osokoya has commenced an enlightenment campaign on the Property Protection and Anti-Land Grabbing deeds to ensure peaceful co-existence among residents.

Leading a sensitisation team to the turret of Tami of Odogbolu and Obanire of Ijebu-Land, His Highness (Engr) Leke Oludipe, the Celebrity City Estate MD, Prince Adewale, said the act of resolving land matters with municipal law is to curb land grabbing that has ended so many lives, and free our youths from hooliganism. This would allow peace to reign in the state capital and other communities rocked by disputes over land sales.

A statement, yesterday, by a Special Assistant (Media) to the MD of Celebrity City Estate, revealed that the main reason for bringing the Anti-Land Grabbing campaign to the notice of Tami of Odogbolu and Obanire of Ijebu-Land. Alongside, all the Oloojas’ (Community Chiefs) which comprises of Kings, Baales, Osugbos, Oloritun, Family Heads, Family members and Youths, is aimed at curbing the activities of land grabbers locally known as ‘omo oniles’ and individuals, engaged in fraudulent sale, resale and forcible occupation of land while armed with charms and dangerous weapons. “Once all the community personalities and departments mentioned above get it right among themselves, and ready to stand with truth and what is just; then, land grabbing would be tagged a thing of the past in our society.”

Prince Adewale stressed that the government should enforce it into the law, advising quarter chiefs, family heads and land owners to be truthful and carry stakeholders along while selling land to prospective developers.

He further expressed regrets that the majority of cases in the law courts in the state emanated from issues relating to forcible acquisition and fraudulent sales of land to buyers.

Adewale added that curbing the activities of land grabbers with custom would give room for peace and progress and reduce litigations on land matters.

Tami of Odogbolu and Obanire of Ijebu-Land, His Highness (Engr) Leke Oludipe, who was an expert in matters of land and its geography, charged the fully seated Oloojas’ (Community chiefs) and other concerned parties to take the enlightenment campaign to their families.

Tami of Odogbolu clarified that under the land law, the government recognises the family that owns the land, but has overriding power to hold the land in trust for the people.

The law, he said, provides that there must be a unanimous agreement by all those concerned with the involvement of principal members before a land could be sold. The head of tradition in Odogbolu noted that, more than half out of voluminous land disputes in his justification has been habitually resolved; which he wants other states to emulate.

Council members’ of Tami of Odogbolu and the Olooja’s (Community Chiefs) were enlightened, most especially; when M.D of Celebrity City Estate, Prince Adewale Morenikeji Osokoya recounted his life story, his encounter with land grabbers and the aftermath effect on him. They were all amazed and opined to do all within their capabilities to support his mission and eliminate any practice of land grabbing.

Prince Adewale, while shedding light on the need to intensify campaigns against land grabbing. “This would really help our youths to get back their right senses, as many of them have lost their lives in conflicts against each other at the site. And, as many as they involved in this heinous act, they have destroyed various business potentials, community developments and other evolutions that are supposed to have emanated in our communities.” He concluded.

Celebrity City Estate is a foremost real estate company that deals in Real Estate, enabling people to acquire their own dream home, acquire land to immortalize A-list celebrities, the organization is also responsible for the campaign against land grabbers, dispute and violence.

Enough Of Your Partisan Politics, Archbishop Warns Mbaka, Says He May Be Ban From Catholic Church

Heart-Broken Widow Narrates How Her Husband Was Gruesomely Murdered

Nyesome Wike Receives His Certificate Of Return From INEC

OMD Named Global Media Agency of the Year 2020 by Adweek

Full Details Of How FG, States, LGAs Shared N8trn In 2018