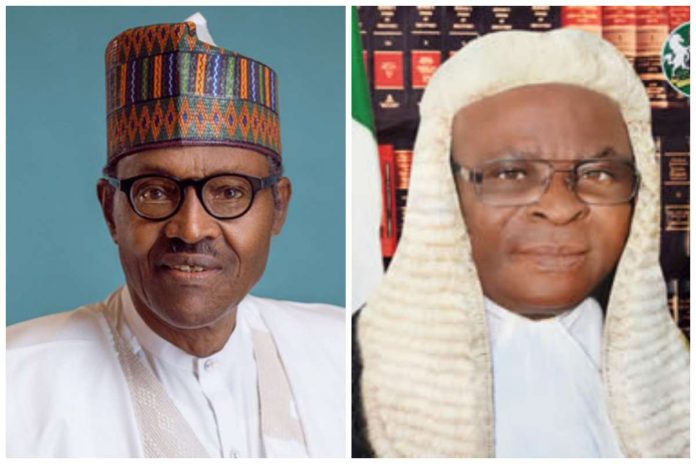 The All Progressives Congress insists that the Chief Justice of Nigeria, Walter Onnoghen, must be allowed to face his corruption trial at the Code of Conduct Tribunal.

In a statement released by its spokesperson, Lanre Issa-Onilu, the ruling party said the allegation made by PDP that Onnoghen’s trial is politically motivated is false.

Read the statement below.

“Following the notice of the charges preferred against the Chief Justice of Nigeria, Justice Walter Onnoghen, by the Code of Conduct Bureau at the Code of Conduct Tribunal, the Peoples Democratic Party has been on overdrive vituperating over an issue that should at best be left to the judiciary to resolve.

While we would not want to be lured into discussing issues that are presently before the courts and for which any respectable political party hoping to hold positions of responsibility should restrain itself, we regret to suggest that the PDP’s attempt to hoodwink Nigerians into believing that there is a political motive behind the allegation brought against the CJN might itself be indicative of some unholy alliances.

The likely affinity existing between the PDP and a section of the judiciary is further accentuated by the nonappearance of Justice Onnoghen before the Code of Conduct Tribunal on Monday, in line with the suggestions made by the PDP governors from the South-South on Sunday.

“Are Nigerians expected to see this as a mere coincidence? Is the PDP and their governors acting a script? Haven’t we missed an opportunity to show confidence in an institution headed by the CJN?

“This becomes more worrisome, knowing that the PDP campaigns have been receiving cold shoulders everywhere they have gone to and it has become apparent the party and its presidential candidate are facing imminent defeat in the February 2019 elections and may be searching for some unorthodox means of forcing itself on the Nigerian people.

“If this were not so, the PDP should, before coming to these distracting conclusions, have taken cognisance of the facts of the allegations made against the CJN and his admission to the facts so stated.

The only logical conclusion in the circumstance is that realising the refusal of Nigerians to allow the deception of the PDP con them into returning the party to power, the opposition party has alongside some pliable human rights activists devised a plot to distract the APC and indeed the good people of Nigeria from addressing the very important issues on the APC’s manifesto in the electioneering process.”

”We have noticed the very dangerous attempt to designate the CJN’s arraignment along ethnic and religious lines, thereby trying to heat up the polity by evoking primordial sentiment which would do the country no good. This is an ungodly ploy when we consider that the CJN was an officer of the federation rather than that of any region,” he warned.

“We therefore urge all Nigerians of good conscience to caution the PDP as the country is bigger than any political party or the interest it represents, and nothing should stop the country’s steady march into sustainable democratic governance.

In our earlier statement on the CJN’s CCT trial, we had noted the PDP’s shocking and innate proclivity to defend cases of corruption anytime it arises. The call by the PDP South-South Governors for the CJN to boycott the CCT trial further cements our position. Let it be reiterated that nobody– no matter how highly placed — should be above the laws of the land.

“We wish to put on record that the virulent attack that has come from the PDP in the wake of the trial of the CJN over alleged false asset declaration is particularly worrisome and suspicious when the PDP has in fact called for the removal of virtually all heads of government’s arms, particularly the Chairman of Independent National Electoral Commission and Inspector General of the Police over frivolous issues.

“While the will not be drawn into debates on the legality and sponsored conspiracies of the CCT trial, we insist that our democratic and constitutional institutions must be allowed to operate without interference and undue pressure from partisan and sundry interests as being done by the PDP and its cronies.

“The CCT trial is a legal matter, let the law run its course. The CJN must go through the instrumentalities of the courts, more importantly as an institution he represents. Indeed, this is the true test of our constitution, rule of law and will deepen democracy.

Where there are contestations on institutional procedures, we must allow same institutions perform their functions unhindered, autocorrect if necessary and set good precedence on future matters. This is the only way we can build strong and lasting institutions,”

Why Buhari Didn’t Die Despite My Prophecy – Lagos Pastor