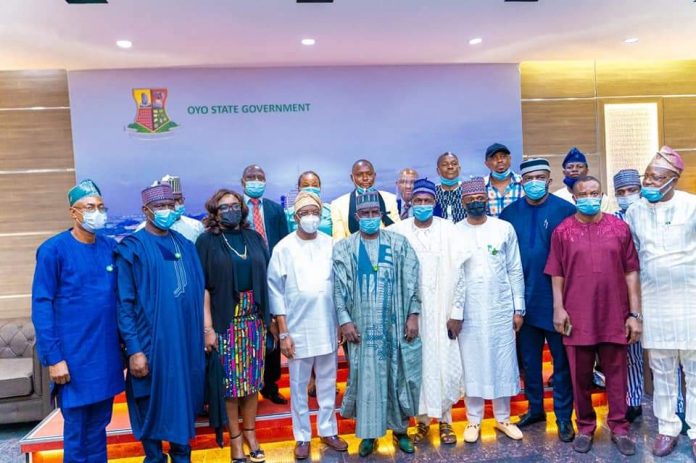 Members of the House of Representatives Committee on Basic Education and Services have expressed satisfaction on the standard and quality of projects executed in Oyo State, commending the State’s achievements in the area of basic education.

Speaking after an inspection of projects in Oyo State, the Deputy chairman of the committee, Hon. Usman Zanna (APC, Borno), said that the state under Governor Seyi Makinde has lived up to its name of a Pace Setter, by surpassing all expectations.
Zana who led a delegation of the committee to the state on oversight visit to inspect and assess the level of utilization of federal government matching grant released to the state to develop basic education infrastructure, said only Oyo state has paid part of counterpart funding in 2021, adding that this attests to the state government’s commitment to the improvement of education in Oyo state.
Receiving the delegation at the State Executive chamber, the Oyo State Deputy Governor, Engineer Rauf Olaniyan said the education drive of Oyo state government is responsible for the drastic reduction in the number of out of school children in the state, stressing that his administration takes education as a major priority.
Engineer Rauf Olaniyan, stated that one of the cardinal points of this administration is Education, adding that the State hopes to regain its pace-setting status by ranking first in WAEC examination before the administration runs out in 2023.
He said the state government is committed to infrastructural development and capacity building for schools in Oyo State and will do all possible including, payment of counterpart funds and cordial relationship with the Universal Basic Education Commission to improve the state of education in the state.

Speaking earlier, the Executive Chairman, Oyo State Universal Basic Education Board, Dr. Nureni Adeniran, said the team has inspected the projects embarked upon by the state government in collaboration with UBEC and are satisfied with the level of work done.

The chairman revealed that the Oyo State government has paid the backlog of counterpart funding to UBEC and has paid all required funding including counterpart funds for 2020/2021 Intervention projects.
Dr. Nureni enjoined the committee to facilitate the release of funds and all other necessary donations due to Oyo state from the Universal Basic Education Commission, including the yet-to-be assessed 3Million Dollars advance funds for Better Education Service Delivery, a World Bank Assisted Loan.

I Will Jail You, If You Are Not Mindful of Your...