Amidst the barbaric and nonchalant attitudes of some gangs which led to the death of a 100-level microbiology student of the University of Benin (UNIBEN), Vera Uwaila Omozuwa, which has spike reactions for justice on the crust of Nigerians, a Civil Society Organisation, which has been Identified as Tech4Justice also known as Citizen’s Gavel, in quest to catalyze the rate at which the killers of Omozuwa would be arrested has placed a N500, 000 bounty for any individual or group that will provide vital information leading to the arrest of those involved in the rape and murder of the 100-level student.

The organization after condemning the barbaric incident, said it will be giving N500,000 to any individual with useful information that will lead to the arrest of the hoodlums.

The group through it Twitter handle said, “Our organisation is raising the sum of N500,000 to pay anyone who has credible evidence that can lead to the arrest of perpetrators of the rape and murder of #JusticeForUwa.”

“The person who provides such evidence shall remain anonymous for security reasons. A proper account of funds will be rendered and made public.” sexual harassment is increasingly becoming a major problem on the crust of the Nigerian girl child as the country dailies continue to report rape allegations every now and then. 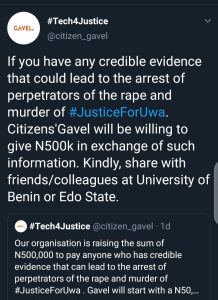 I Am From The Descendant Of Abraham – President Buhari

Yoruba Leaders, Including Governors Are Less Concern About Security In Yoruba...