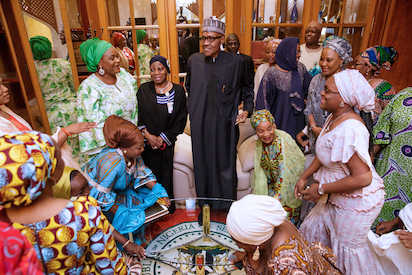 A fresh crisis on Monday erupted at President Muhammadu Buhari’s home as his wife, Aisha, battled the family of Mamman Daura, the President’s nephew.

Daura’s daughter, Fatima, in an interview with the BBC Hausa Service on Monday owned up to a video shot at the Presidential Villa.

In the video, the President’s wife, was heard asking questions and making comments about being locked out of a room and demanding that some people should pack their belongings and leave the apartment.

The First Lady and Fatima, in separate interviews with the BBC Hausa Service shed light on the video, which went viral on Friday.

Fatima in the interview said she shot the video with her phone “in case something happens.”

On her part, the President’s wife confirmed in a 25-second voice clip on the BBC Hausa Service website that she was the person in the video in question.

She accused Fatima of recording the incident while the security detail did nothing because the culprit was Mamman Daura’s daughter.

PDP Reacts As Buhari Says Corruption Is A Threat To February...