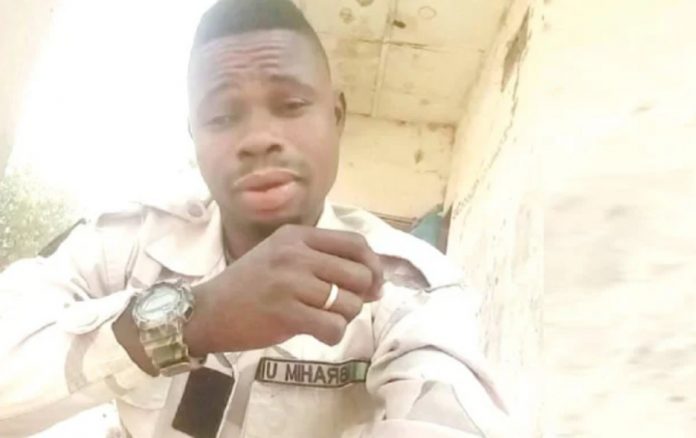 The family of Lance Corporal Kazeem Aribido, who was attached to the 81 Battalion, 2 Division of the Nigerian Army, has been thrown into mourning after receiving the news of his death in a detention centre in Ibadan, Oyo.

It was gathered that Kazeem’s ordeal started in September 2019 when some military personnel found three bullets in his flat in the Mokola area of Ibadan.

The Ogun State indigene was said to have languished in the military detention centre until his death in August 2021.

His widow, Kafilat, explained that the late Kazeem was released to take care of his health after suffering a series of asthmatic attacks during an operation in Zamfara State.

She noted that her husband had barely got home when some military personnel arrived at their residence for a search.

Kafilat said, “On September 10, 2019, when the military police and some intelligence personnel came to search our flat in the barracks, they instructed me to step outside.

“My husband, who had been handcuffed, was there when they searched the flat till they found three bullets in his backpack and took him away to the guard room in the 2 Division in Odogbo, Ibadan.

“When I went there to see him, he said he was being set up, but expressed confidence that investigation would prove his innocence. His colleagues in Zamfara told me he did nothing wrong as he got approval before returning home.”

The widow said Kazeem was later transferred to the Garrison Guardroom at the Nigerian Military Special Investigation Bureau in Abuja, where he was detained for over 17 months.

She said, “He was dumped in a cell at the SIB, Abuja, without being questioned. I went there because I was scared of his asthmatic condition, but I was chased away. I didn’t hear from my husband for four months until he called in April 2020.

“Sometime in June 2020, I was allowed to see him and he told me what happened was connected to the three bullets recovered from his backpack. He said he was bothered about his health and forgot to officially submit the bullets when he returned from the Zamfara operation.

“He also said the soldiers who searched his flat were trying to frame him up, claiming they discovered magazines in the flat, aside from the three bullets. Several army officers, including Major Idris, Okewunmi, Aliu, Akinyemi were assigned at different times to look into his case.

“They even revisited the 81 Battalion barracks, checked his statements of account in the bank during the investigation and found nothing against him.”

The mother of one stated that at the end of the investigation, he was absolved of blame and ordered to be released.

She noted that on his return to the 2 Division, Ibadan, he was detained.

“He told his lawyer that Major Akinyemi, who completed the investigation in Abuja, told him he had been freed and no longer had a case with the Army.

“The charges preferred against him were not ready until after a month. At the resumed hearing, the soldiers brought a witness, but the witness surprisingly debunked the claim that weapons were found in his flat.

“My husband’s lawyer asked the court if he could file a no-case submission and the court agreed. The lawyer submitted the letter in August and we were told to come on Monday, August 23, 2021, for the final judgement. But it was the news of his death I received. I want justice because his death is suspicious,” Kafilat added.

A spokesman for the 2 Division, Nigerian Army, Major Iyke Iweha, said he needed time to investigate the case and get back to this reporter

He said, “Give me time to come back and respond to you appropriately.”

2023: A Formidable Team Is About To Hit Nigeria – Bakare

2023: We Will Not Accept Ike Ekweremadu, Enugu East Will Produce...

I Never Stopped EFCC From Investigating My Activities In Kaduna –...