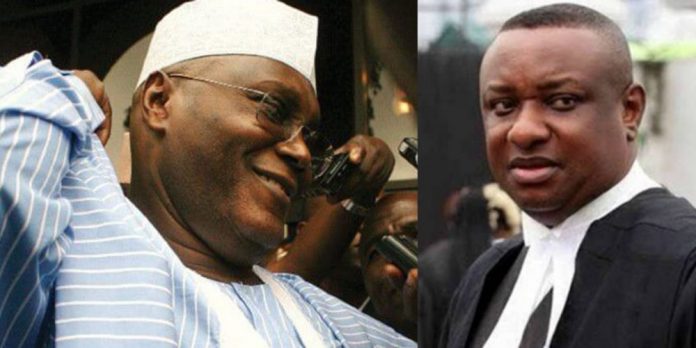 Festus Keyamo, spokesman of the President Muhammadu Buhari Campaign Organisation, says Atiku Abubakar, presidential candidate of the Peoples Democratic Party (PDP), would have been in prison if the system was working before Buhari assumed office.

Keyamo said this while responding to Atiku’s criticism of the president’s comment that the system, not him is slow.

Replying him in a statement on Wednesday, Keyamo said the former vice-president is beneficiary of the failed system and that is why he is not in jail.

Keyamo said Atiku could not compare his integrity with that of Buhari, describing it as a “political suicide mission” he should steer off.

“Let us remind Alhaji Atiku Abubakar that he is one of the greatest beneficiaries of the failed system in tackling corruption that was in place before President Muhammadu Buhari took over in 2015,” the statement read.

“ We know he is aware of this, hence his latest diatribe against President Muhammadu Buhari amounts to nothing but disgusting grandstanding and an attempt to mock the system.

“If the system in Nigeria was indeed working, Alhaji Atiku Abubakar would not have acquired substantial shares in INTELS in clear conflict of his duties as a Customs Officer whilst in office. Those shares would have belonged to the Nigerian people by now.
“If the system was working, Alhaji Atiku Abubakar would have been prosecuted and jailed for various acts of corruption and abuse of office after he left office as Vice President.

“Alhaji Atiku Abubakar latest adventure in trying to stand shoulder-to-shoulder in matters of integrity with President Muhammadu Buhari is a political suicide mission from which we thought his handlers would have tried to steer him away.

“For the information of Alhaji Atiku Abubakar, President Muhammadu Buhari’s gallant efforts in tackling corruption headlong has led to the conviction of the President’s own party men and ex Governors who served under PDP and for acts they committed whilst in PDP. 703 persons and institutions have been convicted by the EFCC under the watch of President Muhammadu Buhari since 2015.

“The biggest recoveries of stolen public funds in the history of Nigeria is being carried out by President Muhammadu Buhari. These recoveries were made from principally his party men who now wish to lead Nigeria with him.

“We also urge the PDP to stop making wild, unsubstantiated allegations of corruption without a modicum of proof. We have no time to respond to any allegation by the PDP without the backing of some kind of document or proof. When we see some scintilla of proof, we shall respond appropriately.

“Alhaji Atiku Abubakar cannot eat his cake and have it.”

I Have Sacrifice For NNPC Pensioners – Baru, Ex-NNPC GMD

BREAKING: I Have Not Resign My office As CJN – Walter Onnoghen

PDP Tells Buhari What To Do On Security