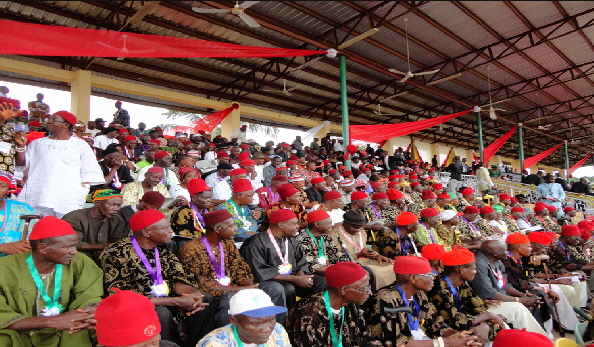 The ruling All Progressives Congress, APC, has given reasons why the Igbo of South-East geo-political zone cannot produce Nigeria’s President in 2023, advising them to play their politics right if they want to govern Nigeria in the foreseeable future, adding that the presidency is not the right of any ethnic group.

National Organising Secretary of APC, Emma Ibediro, said this yesterday in Abuja during an interview with journalists at the party’s national secretariat.

Ibediro, who hails from Imo State, said the Igbo nation must be ready to work within the APC structure or any other viable platform they intend to use to actualise an Igbo presidency, adding that they must also be ready to contribute positively to such a platform.

He described as unjustified, claims by Igbo that they were being marginalised by the President Muhammadu Buhari’s administration, explaining that the people have not brought anything tangible to the table since 2015.

You can imagine Anambra State, for example, bringing in less than 50,000 votes when our members in that state are over 200,000.It means is that even APC members did not vote for our President.

“For instance, in APC, you have to work within the party and with every other member of the party, either from North-West, North-East, North Central or South-West and then, we must come to the conclusion that as an individual, you can have the confidence of Nigerians to become their President.

“The fact that you are from South-East or any other area is neither here nor there. So, if the people from the South-East are aspiring to produce Nigeria’s President, I think the first thing to do is to work within the party and then get the rest of Nigerians to accept them for that position.”

Why I May Not Walk Again – U-17 World Cup Winner, Nwoha

Malabu/OPL245 Deal: I Did Not Take Any Bribe – Adoke Insists

Buhari, APC Sponsoring One Of The PDP Presidential Aspirant – Nyesom...