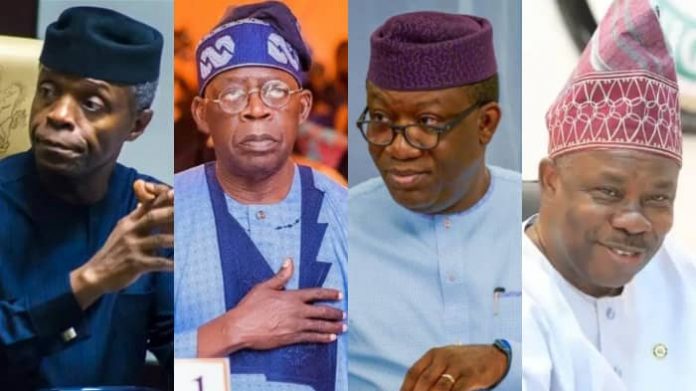 The Yoruba Global Council (YGC), a foremost and  prestigious Yoruba Diaspora – based socio-cultural organization, was established to advance the course and interest of the Yoruba nation through the promotion of unity, mutual trust, trade liberalization, co-existence and interactions with other ethnic nationalities in Nigeria and the Diaspora.

We are also committed to deepening democracy by fostering the ethos, values and healthy practices of representative government in the South West and Nigeria in general.

We seek to use this medium to send strong admonishment to all presidential aspirants of the Yoruba extraction, especially those in the ruing All Progressives Congress (APC), to shy away from divisive or politics of acerbity and eschew electoral violence as the country prepares for the 2022 primaries and 2023 general polls.  To put issues in proper perspectives, YGC warns all Yoruba presidential aspirants, particularly those in APC such as Asiwaju Bola Ahmed Tinubu, the incumbent Vice President, Professor Yemi Osibanjo, Dr. Kayode Fayemi, Senator Ibikunle Amosun and Pastor Tunde Bakare to be circumspect in the way and manner they go about their political ambition.

They need to, at this momentous time of our history,  resist the game plan of the fifth columnists and foes of the Yoruba nation who are bent on taking the presidency away from the Yoruba come 2023. YGC believes that 2023 presents another golden opportunity for the Yoruba to produce the next President for the Federal Republic of Nigeria and divisive politicking or politics of ego and self-centeredness among those jostling for the number one seat must not be allowed to jeopardize such prospect.

History is replete with circumstances in which the Yoruba lost their coveted territory of Ilorin to the Fulani owing to over-ambition and egoistic attitude demonstrated by Atiba. It would be succinctly recalled that it was the over ambition of Atiba to become the Alaafin, at the expense of his brother, Alaafin Oluewu,  that led to the painful loss of Ilorin to the Fulani today. Another trait of disunity played out during the June 12 struggle in which prominent Yoruba sons and leaders left Chief MKO Abiola in the lurch, thereby making the race lose the most exalted seat in the land. Must the Yoruba presidential aspirants and committed stakeholders to the Yoruba course and interest allow history repeat itself by allowing charlatans and political contractors infiltrate their camps and lead them to perdition?  YGC says categorical NO to the ploy and Machiavellian scheme of the adversaries of the Yoruba nation this time around!

In view of the aforesaid, YGC enjoins all Yoruba presidential aspirants, especially the APC Heavyweights, to  sheath their swords, come together, play ball and find a common ground through which a credible, reliable, responsible and capable Yoruba son will be fielded to represent our collective interest and aspirations as well as those of the larger federation –  Nigeria. YGC is not in any way averse to the idea of one federated Nigeria but on the proviso that such a federation is built upon egalitarianism, justice, equity, inclusiveness and sense of belonging for all and sundry.

Besides, it has been, over the years, observed that every election cycle poses potent threat to the sustainability of our nascent democracy and the democratization process. Since 1999, developments leading to each election year had been and have continued to be characterized by political assassination, brigandage, hate speech, gruesome abduction, grandstanding, implosion occasioned by lack of internal democracy (especially after party primaries) and anti-party activities among other encumbrances.

All of these unnecessarily heat up the polity and create palpable fear in the minds of the electorate – a development that compels them (voters) to abdicate their franchise on Election Day. YGC unequivocally decries these dangerous preludes to our elections and canvases for a quick change of the obnoxious narratives.

Based on the foregoing and in line with our mandate and unassailable commitment to advancing the collective interest of the Yorba race both at home and in Diaspora and in fostering peaceful co-existence, we reiterate our warning by calling on all illustrious sons and daughters of the Yoruba nation – seeking the presidency, to embrace unity and a sense of political camaraderie by according Yoruba interest premium priority ahead of personal ambition.

YGC also uses this medium to appeal to all political aspirants, party leaders and critical stakeholders to play prominent role in the advocacy for peaceful, free and fair elections at both primary and general levels ahead of the 2023 general polls. Democracy can only thrive when all stakeholders eschew all forms of electoral violence, but seek to embrace peace in all its ramifications before, during and after the 2023 general elections. Elections will come and go but the indivisibility of the nation and its people unity must remain intact. It is to this end that we crave the indulgence of all players and gladiators in the electoral arena to support our advocacy for peace by contributing to the creation of secure and peaceful atmosphere that guarantees the conduct of free, fair and peaceful elections, especially in Yorubaland and indeed, Nigeria come 2023.

We are utterly aware of the qualities possessed by each of the Yoruba presidential aspirants that have declared their interest to run and we repose sheer confidence in their sense of leadership, charisma, capacity, responsibility, diligence and commitment towards a better Nigeria and Yoruba nation, but everyone of you cannot be president at the same time. Hence, a common ground must be sought and worked upon which will bring to the fore the most capable, reliable and trustworthy Yoruba candidate for the presidency.

In keeping the peace and jettisoning electoral violence, all players and critical stakeholders must again work assiduously in ensuring their campaign trains and parties’ supporters keep to the rules of the game (as enshrined in the Electoral Act) and report the activities of any unscrupulous elements that may wish to thwart the process to the law enforcement agencies for appropriate action.

In summary, YGC fervently believes it is Yoruba time and moment to produce the next president for the country going forward and all efforts to torpedo that dream by enemies of the race by pitching one Yoruba aspirant against the other will be fought with every resource at its disposal.

Once again, YGC recognizes PEACE as one of the critical ingredients that will guarantee a successful conduct of the 2023 primary and general elections and all hands have to be on desk to keep the peace.

Why I Stabbed My Mother To Death – Son

Why We Have Been Supporting Buhari to Continue Borrowing – Lawmaker