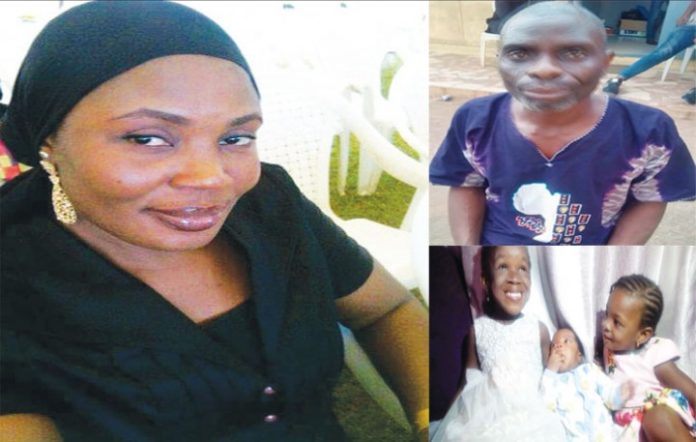 Five months after, the circumstances that led to the death of a forty-year old mother of three, Ngozi Okonkwo, a native of Ogwashi-Uku in Aniocha South Local Government area of Delta State, who died in a Church in Lagos, where she went to worship on a Sunday, is playing out as the police have arrested three persons in connection with her missing phone.

Ngozi, a mother of three, ages from three years old to one and half and three months old as at time of death, was said to have died on June 16, 2019 at the HouseHold of Love Church, located at Addo, Badore Road, Ajah, Lagos State.

She was buried at the Atan Cemetery, Yaba, Lagos, on Saturday, June 22, 2019. Family sources revealed that some members of the church who rushed her to the hospital where she was confirmed dead, paid the sum of N50,000 for the embalmment of her corpse.

However, it was gathered that after the embalmment, no member of the church came to pay condolence visit to the family or attended her funeral, even though they promised to be part of the burial.

Having waited for hours at the Attan Cemetery where a pastor in the Church promised that members of the church would join in the final burial of the deceased, the family sought the assistance of the cemetery attendants who connected them to hire a clergy man from a nearby church, who finally performed the dust-to-dust funeral rites.

Speaking to Saturday Independent, Ogochukwu Anamanya, younger sister to the deceased said that when she was contacted on the phone about the demise of her sister, she rushed to the hospital and met the corpse of her sister lying on the floor.

“I saw some of her church members. They arranged for the corpse to be deposited at the morgue. They even paid N50,000 for embalmment of the corpse. We felt that since our sister died in the church, she would made heaven, and did not suspect any foul play. They handed over her children to us, two girls and a little boy of three months, who went with her to the church. They also handed over hand bag to us. But her phone and pause were not in the bag. We asked about the phone, a lady who claimed to be her friend said my sister did not come to church with phone.

But I know that she doesn’t go to church without a phone. She rather would go to church without a Bible. She read the gospel through her phone. So we decided to let the sleeping dog lies. We felt the phone would have fallen off during the pandemonium. But when we called the line several times on Sunday night, it rang severally too. Nobody picked. But on Monday morning, it was off. Our curiosity started when we told the church that we wanted to bury her on Friday being 21st of June, 2019. A pastor, who was now playing the role of a middle man between the church and my family, told us to fix the burial for Saturday, that they would not be chanced as they were ending up a program on Friday.

We accepted. So on Friday evening, we expected them for the service of Songs. No member of the church showed up. On Saturday being the date for the burial, I called the pastor and told him that we have provided bus for the church members to travel from Ajah to Yaba, for the burial. He asked me the time. I told him the burial was slated for 10 a.m. He said that my family should proceed to the venue (Atan Cemetery), that they were coming to join us there. When we got to the Cemetery, I called him on his mobile phone from 10am to 2pm. He said they were still coming. By 3 p.m. he did not pick call again and by 3.30pm, the line was off, so by 4 pm, we had to hire a pastor to perform the funeral rites.”

Following these scenarios, a petition was written to the Inspector General of Police, Mohammed Abukakar Adamu with an appeal to assist in resolving the circumstances surrounding the death, most especially as her phone, gold necklace and pause containing unspecified amount of money were missing.

The Police boss detailed Abba Kyari, a Deputy Commissioner of Police (DCP), who is the Officer-in-Charge of the IGP Intelligence Response Team(IRT) to investigate the matter.

READ ALSO:  Attend The Largest Gathering Of Parents And Their Teenagers In Nigeria

Armed with intelligence gathered from the family of the deceased, DP Kyari deployed a crack undercover team from the South West sector of IRT led by Philip Rieninwa, a Chief Superintendent of Police (CSP) to comb Ajah for the missing phones and other valuables.

The team made breakthrough when one Yetunde Enyadike was arrested with the missing Infinix Hot 6 Android phone belonging to the deceased. Yetunde told the police that she bought the phone for N13,000 from Mr. Isa Abubakar. She led the police to arrest Isa, who confessed he bought it for NN13,500:00 from one Mr. Tayo Salami, a mortuary attendant at Mosunmola Ajayi Private Mogue, Ajah.

When arrested, Salami confessed that he stole the phone from the body of the deceased woman whose corpse was brought to the morgue where he worked as mortuary attendant. He said that Isa whom he sold the phone was not aware it was a stolen phone.

When Saturday Independent interviewed the suspects, Yetunde, who was visibly shaking, denied knowing the phone was stolen. In fact, she said she had a store where she sells food near the morgue and that Isa, who was owing her brought the phone and asked her to buy it and use part of the money to cancel his debt. According to her, she did ask if it was a genuine phone, and he told her it was not a stolen phone, adding that she neither know the deceased nor the church she attended.

“I did not even know the person. I don’t know her church. I worship with Mountain of Fire and Miracles Church. You can see my Pastor standing there. If he had any doubt about me, he wouldn’t have come for me,” Yetunde lamented.

Yetunde and Isa however were released by police, who said they were innocent buyers. Confessing further, Salami said: “My name is Tayo Salami. I am 45 years old, married with two children. I am from Odeda Local Government Area of Ogun State. I work at Musunmola Private Morgue in Ajah. My work is to embalm corpse. I have worked there for four years. I have also worked at Lagos Island General Hospital mortuary as body embalmment worker.

I was arrested by the police because I stole phone from the corpse that was brought to our morgue for embalmment. I saw a phone on her body and I collected the phone. I did not show it to the family of the deceased. I also saw gold necklace, when her family members brought white garment for the dressing of the corpse. I equally put the necklace on her neck before the casket was taken away with her corpse by her family. After collecting the phone, I gave it to Abu because I did not know how to use it. He gave me N10,000. I did not spend the money. I kept it in my locker at the morgue. Abu did not know I stole it.

I am not into human parts trading. In fact, I have never done it before. Even the morgue is very secured because it is a private one. I don’t have the sim card of the phone with me. This is because I gave the phone to Abu without removing the sim card. I cannot tell where it is until I see Abu. I did not see any pause with her or money.”

Further enquiries at the hospital where the late Ngozi was rushed to, revealed that she was brought in dead. A report signed by Dr. Eze Juliet, for Dayspring Hospital, was captioned ‘To whom it may concern, Re: Mrs. Ngozi Okonkwo F (40years) Brought In Dead.’

The report stated that “This is to certify that the above named patient was rushed into our facility from Church. On examination, there was no respiratory activity, no pulse and cardiac activity noticed. Pupils were fixed and dilated. Please offer any assistance that they might need.”

Also, report of police extract from crime diary dated 16th June, 2019 stated that about 3pm, one Barrister Chime Duru, in company of one Pastor Iloba, all of HouseHold of Love Church, Addo Badore Road, Ajah Lagos came to the Station and reported that on same date at about 1 p.m., a lady called Ngozi (female), surname unknown, who is a church member had a crises, Asthma and fell down on her way home after the church services. The report added that a group of members of the church rushed her to a nearby hospital for medical attention, but unfortunately, the doctor confirmed that she was dead.

The Time To Join APC Is Now, Not When You Die...

I Will Be The First To Receive First Dose of COVID-19...

We Have Destroyed Our Lives – 3 Brothers Arrested For Ritual...

I’m Taking A Break From Music, Says Wizkid As He Reveals...

Petrol Pump Price Crashes, May Sells for N114.53 per Litre