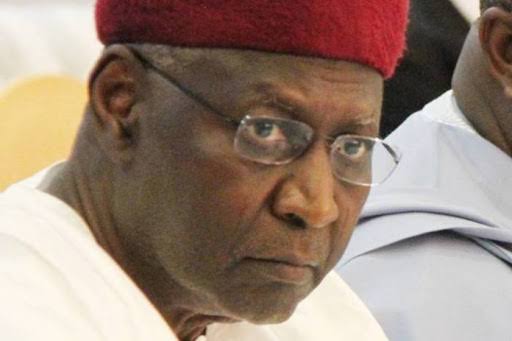 Nephew and trusted friend to the President, Mamman Daura, has disclosed how the 1999 presidential election almost got the late chief of staff to the President, Abba Kyari in the position of Atiku as ex- president, Olusegun Obasanjo, running mate.

Mamman Daura made this note in tribute to Abba Kyari.
He wrote, “These times coincided with the country’s return to democracy and Malam Abba was among those enthusiastically espousing the cause of General Obasanjo. On his selection as PDP candidate, a group of women and youths in the PDP lobbied Obasanjo to pick Malam Abba as his Vice Presidential running mate. After heated debates, Obasanjo eventually picked Alhaji Atiku Abubakar. ”

Daura further set the flash back on his first meeting with the late chief of staff. He claimed that they met when he (Daura) was the editor of New Nigerian Newspaper. Daura explained that the inception of their first ever conversation was based on employment.

Speaking further, he defined Abba Kyari as a diligent man, who took few weeks to move to the main newsroom after spending some time as a proofreader.

The President Nephew described Abba Kyari as a man always working towards personal development. He added, “Constantly striving to improve himself he went to Warwick University in England -where General Gowon also attended after leaving Nigeria as Head of State – and acquired an Honors Degree in Sociology and thence to the world-famous Cambridge University where he graduated in Law before returning to Nigeria. ”

Concluding his personal comprehensive definition about the late chief of staff, he noted that late Abba Kyari is a Philanthropist who used his possessions to aid the needy

“Few people knew that over 10 years ago, he turned his house in Maiduguri (since he no longer resided there) into accommodation for IDPS. At some stage, there were 75 people whom Malam Abba was feeding, clothing and looking after; in addition to their children’s education. Later, the numbers got larger. Malam Abba never said a word to anybody about this. Amma and her siblings are not the only orphans Malam Abba left!

“I’ve lived a fairly simple life and habitually wore a red cap, white clothing and black shoes. He had to be forced by his friends to change the cap and he wore the shoes to the ground before buying a new pair! ”

Why I Can Never Date A Broke Guy – Actress Reveals