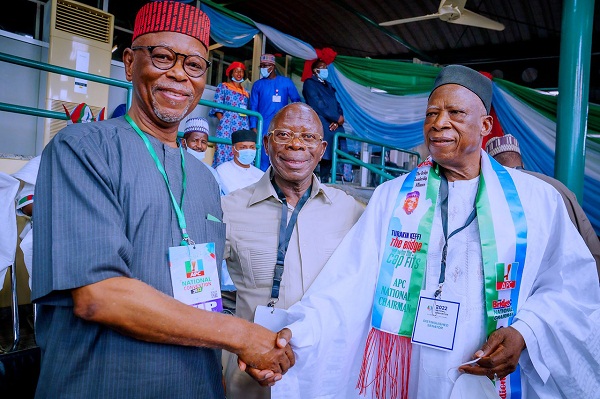 Barring any last minute change, the leadership of the All Progressives Congress (APC) may institute court cases against defecting National Assembly members, and those threatening to ditch the party.

This is as the party may have concluded plans to carry out a major purge which may see the suspension of erring members.

The National Assembly is resuming on Tuesday with lawmakers, predominantly from the APC, likely to announce their defection to opposition platforms.

The lawmakers had expressed displeasure over the outcome of the party’s primaries in which most of them lost out with some alleging they were schemed out by their governors.

Buhari had persuaded the aggrieved members not to leave the party, assuring that their grievances would be addressed.

Following the meeting with Buhari, APC NWC, however, threatened that the defecting lawmakers would forfeit their seats.

Since the conclusion of the primaries, over eight APC senators have defected to the Peoples Democratic Party (PDP), Labour Party (LP) and other political parties.

Speaking on a television programme, APC National Chairman, Abdullahi Adamu, claimed that he was unaware of plans by National Assembly members to defect.

“I am not aware of the defection. In fact, it is fake news. This is a political season and not all politicians will accept the outcome of everything,” he said.

On insecurity, he said the ruling party had not achieved much, adding that the government would not give up, but would continue to devise means to solve them.

To justify his position, he argued that even the United States of America, still grapples with insecurity.

He expressed optimism that the APC would win next year’s presidential elections. He denied working against the presidential candidate of the APC, Bola Ahmed Tinubu, during the primary.

It was, however, learnt that the move to get rid of some members is being proposed by the leadership of the party following the counsel of some stakeholders, especially governors, who are worried that the crack in the party if not cemented could lead to its defeat in the 2023 poll.

Sources who spoke with Sun, said the proposal must be backed by President Muhammadu Buhari before it could be implemented.

“The plan may, however, hit the rocks, if President Buhari, who is the leader of the party, doesn’t approve the move,” said the source.

He explained that the move was to enable the National Working Committee (NWC), purge the party and remove some bad eggs before the powers conferred on it by the National Executive Committee (NEC) expires later this month.

In April, few days after his election, National Chairman of APC, Abdullahi Adamu, had suspended top bureaucrats in APC. No cogent reasons were given by the party for taking the action. The same month, APC ceded its powers to the party’s NWC. The action was taken to curb the excesses of ex-governors and leaders bent on ego trips in their respective domains.

The party had said it was vesting the power of the NEC in the NWC for 90 days, during which it would take decisions on its behalf in the interim, without the need to defer to NEC.

A source said the decision was taken before Osun State governorship election. He, however. said the poor outing of the party in Osun, may have given more life to the move and the pressure being mounted on President Buhari to sanction the proposal.

“Buhari’s approval is needed because of the inclusion of some of his ministers and other cabinet members who are believed to be sabotaging the APC, ahead of the 2023 presidential elections,” the source said.

Though he declined to list those who maybe affected by the purge, it was learnt that ministers, National Assembly members and some former governors have been pencilled down for disciplinary action by the party.

Gumi, Army Tackles Each Other, As 200 Killed in Zamfara, Despite...

Four Nigerian Football Stars Locked Up In India – See Why

You Have Brought INEC Too Much Insults And Disgrace – PDP...