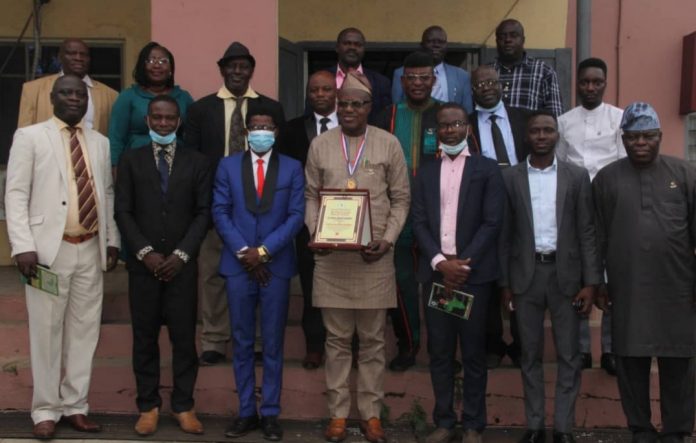 The Oyo State Government has said it will collaborate with the African Students Union Parliament (ASUP) in the fight against drug abuse across the State.

This was disclosed during a courtesy visit of the Parliament to the Executive Chairman, Oyo State Universal Basic Education Board, in Ibadan on Thursday.

Speaker of the Parliament, Rt. Hon. Kewul Abel, from University of Professional Studies, Accra Ghana sought the State Government’s support in the Union’s ongoing sensitization programme against drug abuse across the African continent, urging the State Government to include Fight Against Drugs in its curriculum.

He further said that the collaboration aims to successfully curtail the drug menace in Africa, adding that it became necessary due to the rising cases of illegal consumption of prohibited substances, especially among youths.

Presenting the award, Rt. Hon Abel said that the recipient, whose rise through his chosen endeavours as an Educationist, Lawyer and Politician has been an inspiration to many.

Abel added that Dr. Adeniran is a leader and a role model of excellence with an incomparable inspiration whose name will go down in history as one of the most celebrated and most impactful leaders of our time.

Recounting Adeniran’s several exploits in the public service, Rt. Hon. Abel revealed that ASUP cherishes his achievements, which is a morale booster for younger ones.

In his remark, the Deputy Speaker, Hon. Joseph Konan from Univerisite Felix Houpouet Boigny, Cote-d’ivoire praised the efforts of Dr. Adeniran in promoting the Basic education sector in the State.

He therefore urged him not to relent in his quest to create an enabling environment for the younger generation, where the less privileged can have access to basic education, as this will further etch his name in the sands of history.

He explained that the awardee was carefully selected by an international committee of students across Africa, due to his achievements in the basic education sub-sector he supervises.

In his response, Dr. Nureni Adeniran who expressed the Board’s readiness to work with the Union in tackling drug abuse, noted that the Board has put in some necessary measures to curb any form of vices including drug abuse, across the State.

Reacting to the award presentation, Dr. Adeniran thanked the Africa Student Union Parliament for the honour that has been bestowed on him, while he dedicated the award to his principal, Governor Seyi Makinde, whom he said gave him the enabling environment to operate.

He also expressed his profound gratitude to the Board, Management and staff members of Oyo SUBEB for their unrelenting support and sacrifices at ensuring that the vision of the Board is kept alive.

As an Icon of Nation Building, Dr. Adeniran was also given a ASUP Five-Star General Badge, as well as a matching certificate.

READ ALSO:  Why I Was Arrested, What Suswam Told Me In DSS Custody — Abaribe

Another Lagos Big Boy Commits Suicide, Exposes Those Behind His Death

People I Hold In High Esteem Conspiring With INEC To Work...