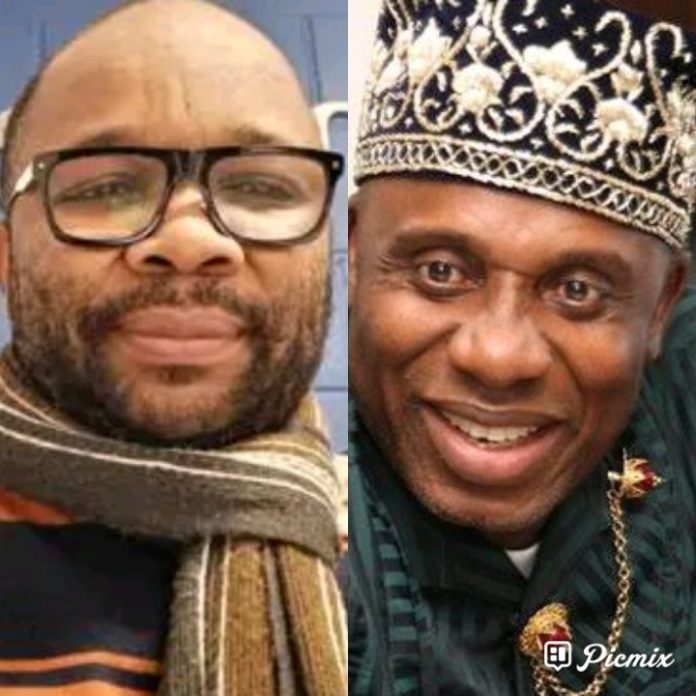 Dr. Uche Igwe, a United Kingdom-based Nigerian scholar and lecturer at the prestigious London School of Economics and Political Science, London, weighs in on the raging controversy on the personae of the Hon. Minister of Transportation, Hon Chibuike Rotimi Amaechi and his suitability as a Presidential candidate in the nation’s forthcoming general elections. Dr. Igwe who is also a Visiting Fellow, Firoz Lalji Institute for Africa, LSE, in an interactive session with a section of the media, declares the Minister as a “highly misunderstood” official whose antecedents as a committed public servant and astute administrator, who suffers no fool gladly, would serve him in good stead. Read excerpts of the interview below.

Let’s start by knowing you.
My name is Dr. Uche Igwe and am a scholar based at the London School of Economics and Political Science in London.

You have been posting regular updates on the minister of transportation, Chibuike Amaechi, many people on this platform are curious, how much do you know him and how well do you know him?

Yes, that’s true. I make bold to tell you that I know him very well. I’ve known him for maybe 18 years or even more. I met him in 2004 when he was a speaker and head of speakers in the country, then he was also serving as a member of the board of the Nigerian Extractive Industry Transparency Initiative (NEITI) where I was a civil society activist and later a civil society officer. So, I’ve known him and some of his friends since then.

Okay, but a lot of people say he’s arrogant, do you agree?

Arrogant? Not at all. I think that he is someone who is highly misunderstood. Rather than being arrogant, he is a compassionate person that is very impatient with mediocrity I would say. In this wise, sometimes he would have to respond as though he is arrogant but look, who you see there is a very compassionate and very respectful individual who respects his elders and even his friends.

He once said that he doesn’t like money while Nigerians have the opinion that politicians like money and they believe that as a politician he must be lying. What’s your take on that?

READ ALSO:  Nigerian Banks Have Turn Their Female Marketers to Sex Slaves, We Must Stop Them Now - Senate

Well, I think that again, this is a statement that is taken out of context, if you ask me in truth, he doesn’t like money.

Really, who doesn’t like money? Can you expatiate on your position?

Certainly, this is someone all through the years, I’ve known him, you cannot hear that somebody gave him a kickback. In Port-Harcourt for instance, I remember, many years ago, how a firm that he awarded several billion Naira contracts offered him 1 billion Naira as kickback. When this came to attention, I was very shocked that he rejected the N1 billion kickback. I can tell you that all through his eight years as governor. Indeed, many people who considered him arrogant are contractors who think that by offering money you can bend him, “No”, you cannot bend him. So in that context, if you say he’s “arrogant” toward those who want to use money to bend him, then “yes”, that is who he is. However, in truth, he is someone you cannot buy with money, and in that sense, he doesn’t consider his relationship space on money, and that is the context that you can use to explain the fact that he doesn’t like money.

Well, Chibuike Amaechi is eminently qualified to be the president of Nigeria. He has been a speaker for eight years, governor for eight years, he’s a minister. During his tenure as a governor, he revolutionised Rivers state. Where do you want us to start? Is it security? Is it the thousands of scholarships he awarded to Rivers state indigenes all over the world? Is it the brand new Port-Harcourt city? Is it the free health programme? Is it the 10,200 teachers he employed in one single day? Where do you want us to start?

READ ALSO:  Jigawa Monarch Rises In Defence Of Atiku, Says He Is Our Blood

It is a fact that during Amaechi’s terms as governor, Rivers state was stable, all the things we hear these days, we never heard about them, you know the security situation was such that many companies relocated to Lagos during the militancy years, under Amaechi leadership, most of the companies had to begin to return to the state. He is also a man that stands for the rule of law, he’s a man who I believe if elected the president of Nigeria, would stabilise the country, and all these insecurity issues you hear about today would become a thing of the past. So if he decides to run for the highest office in the land, he will have my support.

But some say he’s not sufficiently presidential in his ways and the way he behaves. How do you see this?

Well, again, that’s very misleading. I don’t think that’s correct. This is someone who is very unconventional in his approach, this is someone that you can hear at 12 midnight he’s on a project site inspecting project, this is the Amaechi I know. This is someone who works and works, when you hear about the number of roads constructed, you’ll never hear when those roads were commissioned, Amaechi just does his work, so because he’s not that conventional politician that goes to the media all the time to “show off” what he did and what he didn’t do. If that is why they say he is “unpresidential”, I disagree. He’s a man who wants to do his work, and in this country today, what we need is someone who will be committed to serving the people. I think in Amaechi, I see that individual.

Now we understand that his party, the ruling party has zoned the presidential ticket to the south and may be considering a consensus in their presidential primary election as they did recently during their convention. What’s your take on this?

Well, yes, you said his party, I think it remains strictly the party’s affair to make their decisions by consensus or whatever. My only view about zoning the presidency to the South is that the Southwest has had eight years of Obasanjo’s presidency. The Southwest has had almost eight years of the vice presidency under Yemi Osinbajo, if the presidency will go to the South again, I think it’s important to consider the Southeast or the Southsouth and in-between the Southeast and Southsouth, we must look for someone who can win the election for us! I think that if the party decides to offer the presidential ticket to Rotimi Amaechi, I think he would win the election.

Are you sure the Honourable Minister stands any chance?

I think he stands a very great chance to win the election. This position is based on the work he has done in Rivers state and his history of performance as a Minister. Nigerians would be glad that the nation decided to have someone like him preside over the affairs of this country.

Is there any other thing you may want Nigerians to know about Rotimi Amaechi?

Well, I think that we should not be hasty in concluding about a person’s suitability or otherwise. This time around, we should consider individuals who have a good history and a track record of performance. If you looked around, the priorities we have as a country right now are security, infrastructure, and the economy, we need to look around for people who also have energy, people who have good health.

Amaechi will work from morning till night and inspect projects even at midnight, okay? So we want a president or presidential candidates who have good health, who have energy. It is for Nigerians to decide, but for me, if Amaechi decides to run, I think he has all the requisite qualities and I will support him.

Why I Set Up A Personal Youtube Channel – D’banj

Fuel Price May Increase as Brent Stablizise Around $35/barrel

I Have A Woman In My Life – Don Jazzy