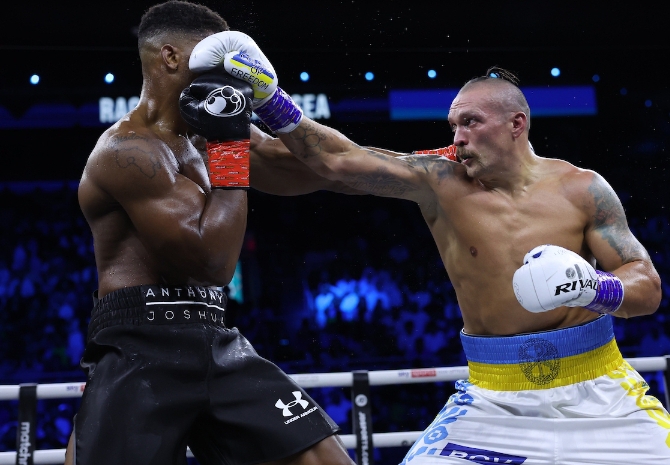 The Englishman lost on a split decision as Usyk defended his heavyweight titles, beating Joshua for a second time.

Joshua threw two of Usyk’s belts on the floor at the end of the fight following the result and headed for his changing room before storming back to the ring to shake Usyk’s hand.

He then picked up the microphone and went on an expletive-filled rant, discussing the fight, his career, leading cheers to Usyk, and discussed the ongoing crisis in Ukraine.

Joshua’s emotions were clearly running high following the loss after twelve rounds of stunning boxing, and he returned to the ring to address the crowd in Jeddah.

The Englishman began by referencing his youth and troubles with police as he reflected on his career following the devastating defeat and applauded his competitor.

“If you knew my story you would understand the passion. I ain’t no amateur boxer from five years old that was an elite prospect from youth.

“I was going to jail, I got bail and I started training my arse off, I wanted to be able to fight.

“I’m stealing this Usyk I’m sorry, but it’s because of the passion we put into this. This guy to beat me tonight, maybe I could have done better, but it shows the level of hard work I put in so please give him a round of applause as our heavyweight champion of the world.’

Joshua pushed Usyk all the way and produced a largely more impressive performance in his first fight at Tottenham Hotspur stadium last year but couldn’t find a way past his Ukrainian counterpart.

The former champion insisted he was a ‘new breed of heavyweight’ in the aftermath of defeat as he labelled Usyk as a ‘phenomenal talent’.

“This guy here is a phenomenal talent, we’re going to cheer for him three times.”

How CP Odumosu Allegedly Ordered His Men To Lock Out Residents...

My Plan Is To Retire To Daura Not Kaduna When I...