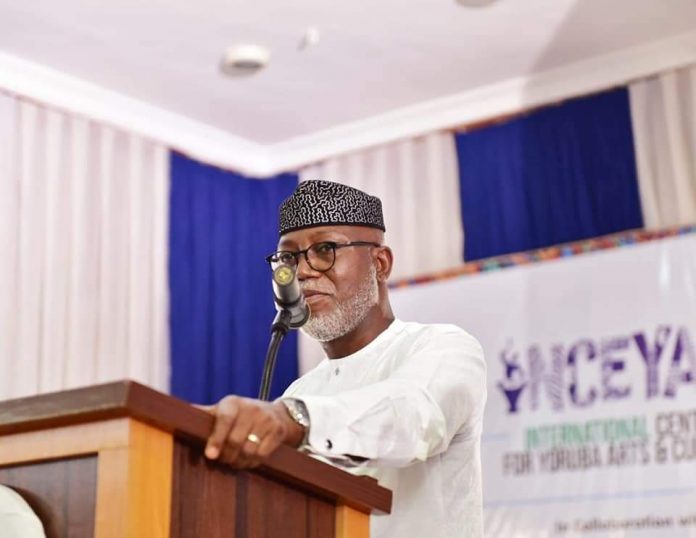 Ondo State Deputy Governor on Tuesday declared “Yoruba Culture as a fantastic Culture that covers all facets of our lives” .

The Deputy Governor who spoke while representing Ondo State Governor, Arakunrin Oluwarotimi Akeredolu SAN at the unveiling and Launching of International Center for Yoruba Arts and Culture ( INCEYAC ) at University of Ibadan, Oyo State said, “a project like this should be supported because it is a one-stop place for ones discovery”.

He lauded the promoter of the project, Ogbeni Alao Adebayo who is also the Publisher of Alaaroye Newspaper and, the University of Ibadan for the vision behind the project.

Aiyedatiwa further promised that, Ondo State would continued to be partner in supporting Yoruba Culture and the Omoluabi Values which the race is noted for. “The Government of Arakunrin Oluwarotimi Akeredolu SAN will partner this audacious project that is bound to enhance the Values and unique Culture of our race” , he said.

“Yes, we have so much of our arts and Culture that we can showcase to the World and the coming generations, so much good Values are derived from our culture” . He further explained that, Yoruba Arts have the power to change people mindset.

“Let’s use our arts to tell the positive story about Yoruba to the World and also to us ourselves- because, I believe we as Yoruba needs to hear our story repeatedly daily, given the many troubles we have across the country” , he said.

READ ALSO:  Minute By Minute Details Of How Father Inlaw Of Buhari’s ADC Was Kidnapped

“And I made bold to declare that, as a proud Yoruba man, this place, the Yoruba World Center will serve as a destination of one’s discovery” , declared Aiyedatiwa.

In his own goodwill message, Nigeria Vice President, Prof Yemi Osinbajo SAN, GCON, who was the Special Guest of honour, declared his love for arts for its story telling power and potentials.

The Vice President said, “Yoruba has a vast art heritage, you go back thousand of years , look at the works from Benin, the works from Ile-Ife were so superior that, when white European visitors first arrived in Africa, they refused to believed that we made those works ourselves” .

Continued, Osinbajo stressed that, “that is obviously because they had prejudice on their side but our works particularly Yoruba Arts were superior” .

He then called on all and sundry to ” used our culture to design our World in a more positive way”. “This center should be sanctuary where one can reflect on the concept of Omoluabi” , he appealed.

Why I bath My Wife With Acid – Husband

Proffer Solutions Or Be Arrested – Miyetti Allah On OBJ’s Open...

If You Want Restructuring, Go To The National Assembly, Stop Disturbing...

I Have Made Billions Before Venturing Into Politics – Ortom

What The Divorce Prank Did To My Marriage – Seyi Law