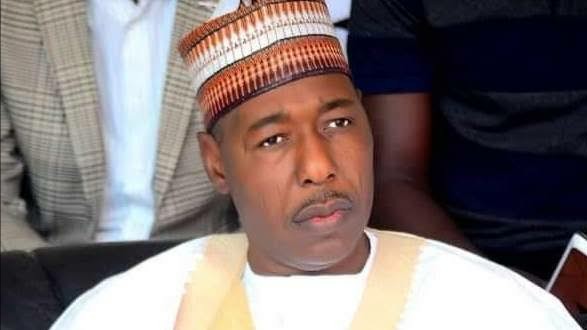 The Governor of Borno State, Prof Babagana Zulum, said on Friday that for the sake of fairness, power should return to the south in 2023. He faulted the suspicion that any part of the country could not be trusted with power, perhaps for the fear of secession.

He stressed that there was a need for fairness in the country, adding that marginalisation had become the loudest concern from the citizenry.

He spoke in Lagos on Friday at the 17th Chief Gani Fawehinmi annual lecture, themed‘The constitutional history of Nigeria’s dysfunction: Any pathway to indivisibility and common progress? which was an event organised by the Nigerian Bar Association, Ikeja Branch, to celebrate the life and times of the late Fawehinmi. The governor stated that one of the pathways to common progress was for fairness to reign in the country.

Zulum, who was accompanied by some commissioners and special advisers, explained that power should shift to other sections of the country.

The incumbent President Muhammadu Buhari (retd.) is from the North-Western state of Katsina and is serving his second and final term in office. The governor said,“I’m persuaded that other sections of the country should be given the opportunity to lead in 2023, why not? It is constitutional.”

Zulum, who reeled out the criteria set by the constitution for anyone to contest the Presidency, as contained in Section 131 of the 1999 Constitution (as amended), asked all the persons from the South-East and South-South at the event to rise. He then told them that once they met the four conditions stated in the Section, they were also qualified to contest the presidency.

The section reads, “A person shall be qualified for election to the office of the President if (a) he is a citizen of Nigeria by birth; (b) he has attained the age of forty years; (c) he is a member of a political party and is sponsored by that political party; and (d) he has been educated up to at least School Certificate level or its equivalent.”

Speaking further on the issue of fairness as regard 2023, he stated,“Consequently, my response to the question posed by the theme of this programme is that yes, there are pathways to indivisibility and common progress; we must collectively agree that we need to do more to demonstrate fairness to every constituent part that made up this country. That is the constitution.

“We need to understand that pedestrian suspicion is not an empirical or legal reason to deny any section of the country from participation in the leadership of this country. We are fast moving towards a point of inevitable tension.

“One of the loudest concerns from the public is marginalisation. Therefore, we must as a matter of necessity create an environment that is conducive for everyone. People must feel the impact of the government and that government is responding.”

The governor also said south-easterners should negotiate for power rather than expect others to leave it for them.

“I said this because I have heard many people say ‘they don’t want to give us power’ but assumptions and projections will never actualise your aspirations. We must all remember that God gives power but human beings negotiate for it. Every interested party must be prepared to negotiate for it.”

The governor also expressed reservation over the age limit of 40 as the minimum to contest the presidency, noting that in many countries around the world, people below 40 had become world leaders.

“We must review our constitution to reflect this current reality in our country and provide greater access to the greatest number of our citizens,” he added.

He admonished Nigerians to familiarise themselves with the 1999 Constitution, saying even though there are issues with the document, he believed strongly that it could still produce good results when faithfully discharged.

He added,“If governance were to be a religion, the constitution would be its holy book. You know your Bible, you know your Quran, know your constitution. Gani Fawehinmi fought for a people’s constitution. We cannot let him down. Let us work to build bridges and drive a people-oriented constitution that would make Nigeria better for everyone.

“We must make the constitution of Nigeria work for all Nigerians and not just some Nigerians. Our system of government must give people a voice while delivering services to them, including security of lives and property.”

The Chairman, NBA, Ikeja Branch, Mr Bartholomew Aguegbodo, said the event was to celebrate the life of late Chief Gani Fawehinmi (SAN), whom he described as a great and courageous fighter who stood for what he believed to be right. He lamented that public interest litigation, which Gani did passionately, seemed to have become a thing of the past.

He added,“This is a challenge to all of us in practice. Also, this occasion reminds us all that the man we honour today had an idea he lived for; that legal practice is not only for money-making but also standing for the oppressed.”

COVID-19: Abuja Currently With The Highest Number of Daily Cases

Danger As Another Pipeline May Explode In Alagbole, Lagos Suburb Soon...

25 Years Anniversary: Lancelot Imasuen Gives Back, Calls For Audition For...