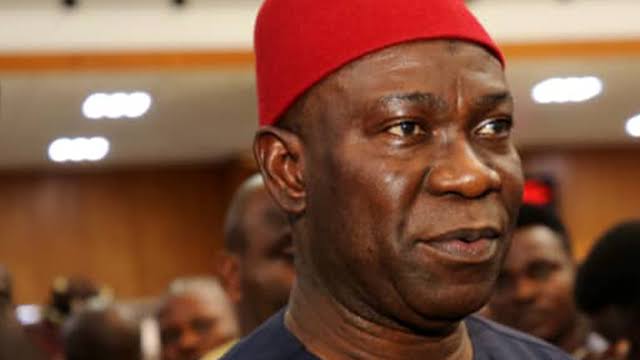 Former Deputy Senate President, Ike Ekweremadu, will remain in prison till October 31st as the case has been adjourned again.
Ekweremadu appeared in court on Thursday, August 04, leaving on the order that he will remain in Custody as the judge adjourned the case till the end of October for a hearing.

Ekweremadu’s first court appearance: It can be recalled that the Nigerian senator first appeared before the Uxbridge magistrates’ court in London, where the lawmaker denied all the charges against him.

Both Ekweremadu and his wife were denied bail and remanded in custody while the case was adjourned to July 7 and now August 4, 2022.

Ekweremadu’s second court appearance: In the last hearing on Thursday, July 7, the Westminster Magistrates’ Court in London, the United Kingdom (UK) ruled that Ukpo is not a minor, adding that he is actually 21 years old.

In other news: On July 2nd, his wife, Beatrice was granted bail under strict conditions.

Newsmen gathered that Ekweremadu put in a request for a new counsel on Wednesday.

Exclusive Proceeding: Only 20 people were allowed into the court premises to witness proceedings and any and all recording devices were barred.

Ekweremadu’s side of the story

The originating summon, marked: FHC/ABJ/CS/984/2022, and dated and filed on June 27 by Awomolo before Justice Inyang Ekwo of a Federal High Court, Abuja said: “The applicants have a daughter named Sonia Ekweremadu, who is suffering from kidney failure and the applicants have been managing it for about five years. The said daughter of the applicants urgently needed kidney transplant to save her life.

“David Nwamini Ukpo, offered to donate one of his kidneys for the daughter of the applicants if his kidney is compatible with that of Miss Sonia Ekweremadu.

“David Nwamini Ukpo informed the applicants that he is Twenty One (21) years of age having being born in the year 2000. The 1st applicant supported the visa application of David Nwamini Ukpo to the United Kingdom with a letter to the British High Commission in Nigeria, explaining the purpose of the visit i.e. to enable him undergo medical examination in the United Kingdom so that the donor and Sonia Ekweremadu get the best of medical attention.

“After conducting various medical tests, the Royal Free Hospital in London decided that the said David Nwamini Ukpo was not a suitable donor because his kidney is not compatible with that of Sonia Ekweremadu.”

According to Awomolo, Ukpo was then asked to return to Nigeria but rather than do so, he approached the authorities in the United Kingdom for protection from being returned to Nigeria.

He said further in the originating summon: “David Nwamini Ukpo told the United Kingdom police that he is fifteen years of age contrary to the information supplied to the applicants by the same David Nwamini Ukpo.

“The applicants verily believe that Ukpo was actually 21 or more having regards to the public records in the custody of the respondents. The applicants were arrested by the Metropolitan Police in the United Kingdom on June 21 for the allegation that they brought a 15-year-old child (a minor) to the UK to harvest his organs.

READ ALSO:  This Is Why Canada Denied Air peace From Evacuating Nigerians - Minister

“The applicants were charged before the Uxbridge Magistrate Court, United Kingdom on the 23rd of June 2022 for offences of conspiracy to arrange/facilitate travel of another person with a view to exploitation, namely organ harvesting.

“The court denied them bail and they are presently in the custody of UK authorities. The applicants require documents from the respondents to assist in the fair criminal investigation and as facts in their defence to establish their innocence of the allegation in the charge and to prove that David Nwamini Ukpo is not a minor and indeed consented to the medical examination in the United Kingdom.

“The said David Nwamini Ukpo is presently in care in the custody of British Authorities and he cannot be accessed by the applicants. The documents being sought to be handed over to the applicants will support the applicants in their defence and establish their innocence of the charges brought against them.”

BREAKING: If You Dare Me, I Will Release Evidence FG Printed...