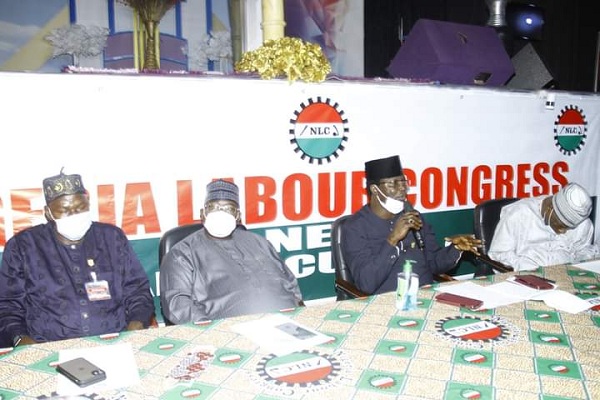 The Nigeria Labour Congress and the Trade Union Congress have suspended the strike scheduled to commence today (Monday). This followed an agreement reached with the Federal Government at a meeting which started at 8.30pm on Sunday and ended at 2:50am this morning.

After exhaustive deliberations on the issues raised by the labour centres, the meeting agreed to suspend the application of the cost-reflective electricity tariff adjustments for two weeks. The Minister of Labour and Employment, Chris Ngige, read the five-page communique signed by the representatives of the government and labour.

Olaleye confirmed the development in an interview with Punch on Monday morning. He said, “Definitely correct. We just left a press conference. We signed a document to suspend the action for two weeks for the government to implement those things that we agreed in the agreement. So, we are suspending for two weeks.

“We don’t need a notice again to re-convene if there is a need to do that.” The parties agreed to set up a technical committee comprising Ministries, Departments, Agencies, NLC and TUC. It would work for a duration of two weeks effective September 28, to examine the justifications for the new policy “in view of the need for the validation of the basis for the new cost-reflective tariff as a result of the conflicting information from the fields which appeared different from the data presented to justify the new policy by NERC; metering deployment, challenges, timeline for massive rollout.”

The members of the committee include the Minister of State Labour and Employment, Festus Keyamo (SAN) as Chairman; Minister of State Power, Godwin Jedy-Agba; Chairman, National Electricity Regulatory Commission, James Momoh; Special Assistant to the President on Infrastructure, Ahmad Zakari as the Secretary. Other members are Onoho’Omhen Ebhohimhen, Joe Ajaero (NLC), Chris Okonkwo (TUC) and a representative of electricity distribution companies.

The committee’s terms of reference are to examine the justification for the new policy on cost-reflective electricity tariff adjustments; to look at the different DISCOs and their different electricity tariff vis-à-vis NERC order and mandate; examine and advise government on the issues that have hindered the deployment of the 6 million meters, among others.

“During the two weeks, the DISCOs shall suspend the application of the cost-reflective electricity tariff adjustments,” the communique noted. It also noted that the FG has fashioned out palliatives that would ameliorate the sufferings that Nigerian workers may experience as a result of the hike in cost electricity tariffs and the deregulation of the downstream sector of the petroleum industry. The palliatives will be in the areas of transport, power, housing, agriculture and humanitarian support.

The meeting also resolved that the 40 per cent stake of government in the DISCO and the stake of workers should be reflected in the composition of the DISCO’s boards. It agreed that “an all-inclusive and independent review of the power sector operations as provided in the privatization MoU to be undertaken before the end of the year 2020, with labour represented.