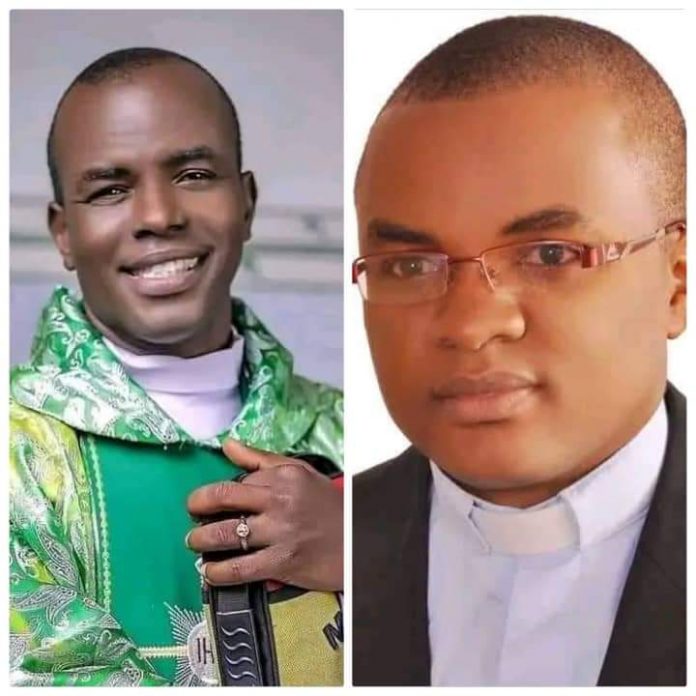 …His replacement, Fr Amadi, who was present at the Mass, was nearly lynched by angry worshipers after the announcement – Vanguard reports.

There was pandemonium at the Adoration Ministries, Enugu, Nigeria, AMEN, Sunday evening, following an announcement that Bishop Callistus Onaga had removed Fr Ejike Mbaka as the Spiritual Director of Amen.

Fr Mbaka, who personally made the announcement during the Sunday Mass, stated that the bishop had appointed Fr Anthony Amadi as the new Spiritual Director of AMEN, to be assisted by other unmentioned priests.

“So, while I proceed to the monastery to continue with the remaining disciplinary exercises, as directed; I wouldn’t know how long; but the church has appointed Fr Anthony Amadi, one of us, to be overseeing all affairs of the ministry, to be assisted by other priests, pending my return, by the grace of God,” Mbaka stated.

Mbaka had earlier explained that the ministry had not fully opened, pointing out that some programmes including the weekly Friday all-night adoration remained suspended till further notice.

According to him, “our Sunday Masses and Wednesdays’ ‘E No Dey Again’ programmes would continue, while others such as Friday all-night adoration remains suspended”.

Meanwhile, Fr Amadi, who was present at the Mass, was nearly lynched by angry worshipers after the announcement. The angry mob had already enveloped him before AMEN security personnel rushed to his rescue and guided him to the Father’s house.

Mbaka had barely mentioned the new priest’s, name when the congregation erupted into, shouting “we say no,” “we say no,” we no gree and started carrying green leaves, thereby forcing Fr Mbaka to quickly conclude the Mass.

Thousands of faithful had excitedly thronged the prayer center from far and wide following an earlier wide announcement that Bishop Onaga had lifted ban on the ministry.

They were however left dejected following the latest development.

A source told our reporter that Fr Mbaka was only allowed to celebrate Mass at the centre so that he would personally make the announcement. It would be recalled that Bishop Onaga had slammed a veiled ban on the fiery priest mid June, 2022.

He had simply announced official prohibition of all Catholic faithful, clergymen and religious from attending all AMEN programmes, a Catholic ministry that was founded and run by Mbaka.

Funke’s Murder: We Have Not Make Any Significant Arrest – Police

Un-Ban Twitter Or Prepare To Go To Court – PDP Reps...

Singer, Victor AD Speaks On His First Encounter With Davido