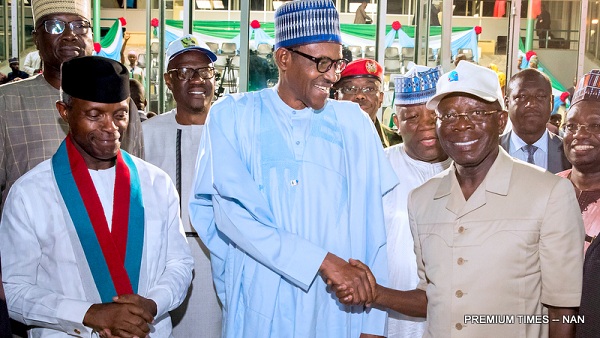 The National Chairman of the All Progressives Congress, Adams Oshiomhole, will today (Friday) lead state chairmen of the party to meet President Muhammadu Buhari.

The visit is coming a day after governors elected on the platform of the party met behind closed doors with the President.

Thursday’s meeting was attended by Vice-President Yemi Osinbajo and the Chief of Staff to the President, Mr Abba Kyari.

However, the national chairman of the APC said to have been expected at the meeting was absent.

A top member of the APC, who confided in one of our correspondents, said, “The two meetings are part of efforts to avoid the party’s disintegration after Buhari’s second term.”

The APC is currently battling with crises in Edo, Bayelsa , Anambra, Edo and Ondo states.

Buhari, had at the party’s National Executive Committee meeting last month, urged all members to unite.

An associate of the APC national chairman said Oshiomhole was not formally invited to the meeting on Thursday and so couldn’t have been expected at the meeting.

He said, “It was a meeting with the APC governors so the national chairman was not supposed to be at the meeting. It is tomorrow (Friday) that he will be leading the state chairmen to see the President.”

Oshiomhole’s Chief Press Secretary, Simon Ebegbulem, did not answer calls to his phone and did not reply a text message on the matter.

The meeting will be the first between the President and the state chairmen after the 2019 general elections.

The Secretary of the Forum of APC State Chairmen and Enugu state chairman of the party, Dr Ben Nwoye, confirmed the scheduled meeting with the President.

“Yes, the national chairman is leading us tomorrow to the President on a courtesy visit,” he said.

Nwoye said the meeting had nothing to do with the call by some aggrieved members for the resignation of the national chairman.

According to him, Oshiomhole enjoys overwhelming support of the state chairmen, adding that the call smacked of irresponsible politicking.

Recall that some members of NEC of the party including a few state chairmen and non-National Working Committee members recently called for the resignation of the former Edo governor for alleged highhandedness in running the party.

Galaxy Of Stars At The Premiere Of “She Is” The Movie...

I Am Not Dating Broda Shaggi – Sophie