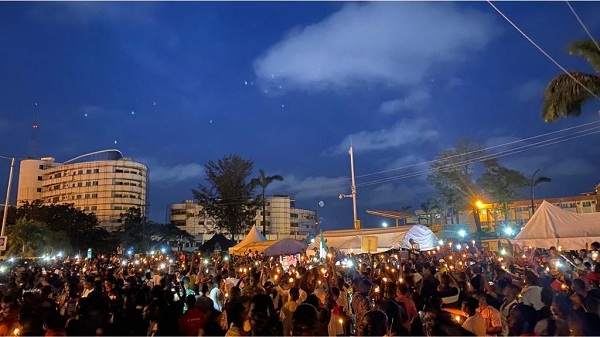 Nobody saw it coming even though it was long coming. The dreaded police outfit, now disbanded Special Anti-Robbery Squad (SARS) has run it full course, leaving tears, blood and sorrow in its wake.

But all that is now history as the youths who were mostly their victims have risen up to demand change and change seems to be on the horizon as the infamous unit of the Police Force has been scrapped and replaced with another unit christened Special Weapons and Tactics Team (SWAT).

Sega Awosanya known as Segalink on social media is known to have been the person that beat the drum to everyone’s ears but entertainers are the ones who fired the first shot, starting off a wildfire that has consumed the whole nation. So far, the epicentre of the protests remains Lekki on the Island of Lagos where most entertainers reside.

The protests began proper on Monday and was supposed to take a bigger dimension on Tuesday with singer and rapper, Naira Marley to lead the charge but that was not to be as he was leaned on by the police to back off. But that would not deter the likes of Falz, Runtown and others who made good their promise to step out on Tuesday. Since Tuesday the country has been on fire with the crowd growing larger by the second.

Soon the protest became a carnival, especially at the Lekki Toll Gate where protesters have been sleeping and holding a concert of sorts since Wednesday night. On Thursday a timetable of activities emerged on social media to intimate protesters with what to expect. Some organizations have been part of the whole setup providing food and drinks to protesters.

READ ALSO:  Truck Goes Up In Flames In Lagos

And on Sunday which is billed as the final day of the protest the plan is pretty much the same except the live streaming of Pastor Adeyemi’s service. “ I strongly believe the protest should continue because only today, I collected 20 Bigi Gala, 7 stick sweets and I can’t count how many Fanta I keep when nobody dey do birthday. At this place, I fit use all these things to open shop for Lagos.

I beg make #EndSwat be one month,” a protester by the name of @shank_comics tweeted. Falz, Runtown, Don Jazzy, Wizkid, Davido, Naira Marley, Omotola Jalade-Ekeinde, Genevieve Nnaji, Toyin Abraham, and practically all entertainers have raised their voices against police brutality, demanding for total reform of the Nigerian Police Force.

Stay Away From Ballot Boxes Or Be Ready To Lose Your...

More Troubles For APC Ahead of 2023, as Fresh Membership Registration...