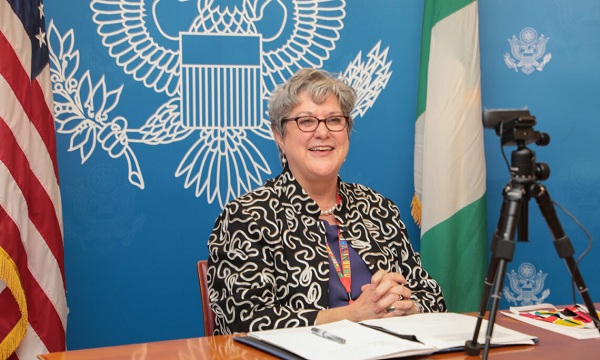 The United States has shut its embassy in Lagos following the crisis that has erupted in the state as a result of the #EndSARS protests.

US nationals in Nigeria have also been urged to keep a low profile as a result of the violence that has rocked the nationwide demonstrations.

The US mission said Americans in the country should avoid protest grounds and exercise caution when in large gatherings.

The protest is part of a nationwide #EndSARS movement which started as an opposition against the now-dissolved special anti-robbery squad (SARS) of the Nigeria police force.

The agitators are demanding better welfare and improved governance in addition to justice for victims of police brutality.

Although it had progressed peacefully in most parts of the country, some states are beginning to record violence after suspected thugs allegedly hijacked the movement.

On Tuesday, police stations were burnt in Lagos and Oyo states, barely 24 hours after some were set ablaze in Edo state.

Lagos, Edo, Ekiti and Osun have all declared a 24-hour curfew in the aftermath of the violence. In a security alert published on its website on Tuesday, the US asked its citizens to remain vigilant amid the protests.

The alert read: “Multiple demonstrations are ongoing across Nigeria – to include areas within the consular districts of Abuja and Lagos.

“Although most demonstrations are peaceful, some have become violent and have shut down major thoroughfares and bridges. Some police stations have been targeted.

“Lagos State closed all schools indefinitely as of October 19 due to protests and implemented a 24-hour curfew starting at 4:00 p.m. on October 20. Consulate General Lagos is closed for the rest of today and tomorrow.

“We continue to urge all U.S. citizens to avoid areas around protests and demonstrations and to check local media for updates and traffic advisories. Continue to be vigilant and avoid areas affected by the protests.”

It further asked its citizens to: “Avoid the areas of the demonstration(s), exercise caution if unexpectedly in the vicinity of large gatherings or protests, keep a low profile, be aware of your surroundings, monitor local media for updates.”

Nigerians Know My Administration Has Done So Much – Buhari