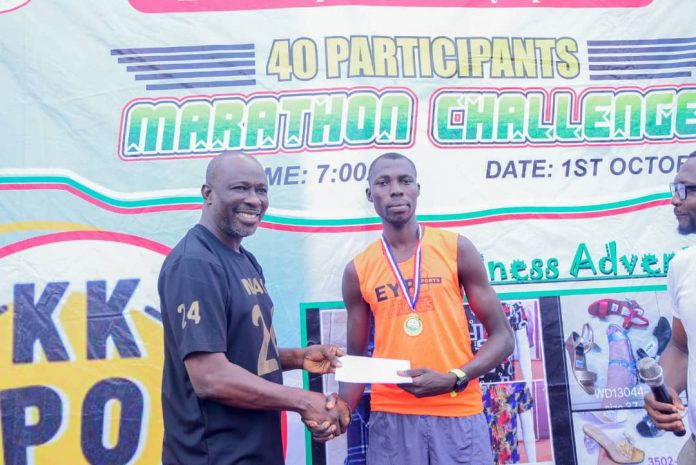 Akinwunmi Rufus Akinniyi has again shown great resilience coming up against elite racers like himself at the Estate Youth Parliament (EYP) 2022 Marathon challenge while putting up a brilliant spectacle and successfully defending his 5 laps EYP Marathon title for the second consecutive season.

Seyi an internationally based racer was in 2020 the first ever winner of the EYP Marathon challenge after it commenced.

EYP’s Lasisi Emmanuel started very well in the race and he did well to hang on to the 3rd spot before overtaking Seyi Abiola’s 2nd leading racer position at the last lap which was not the kind of outcome EYP champion Abiola would have hoped for.

The event lived up to its objective of unearthing talents.

Abiola told newsmen that his emergence in 2020 bore to the fact that he still had a lot of hardcore training in him as he had just returned to the country then.

He noted that although his second position was overtaken, his resilience towards success can never be defeated as his present state determines his success rate which stimulates him to practice harder ahead of more racing competitions.

However, the racing outcome has become a spectacular season for Akinniyi, scooping a plethora of trophies at the event as he records the best 5 laps hurdler in this season.

While sharing his heartfelt feelings, Akinniyi noted that he won the trophy through self-determination by going extra mile in practising harder to retain the good history.

He said as an athlete, venturing into his racing career exposes him to the intrinsic aspect of racing because a marathon is not all about jogging anymore as it is becoming harder which stimulates him to keep up with elite racers while competing and maintaining a healthy way of life to stabilize his physic.

Under the female wing, 7-year-old Hassanat Hassan records a first-time history of a juvenile emerging winner, while 14-year-old Sofiyyat Muhideen and 16-year-old Mariam Adenekan got second and third place respectively.

Hassan while commenting on the programme as a kid participant encouraged the organizers to put in more effort in widening the horizon of the competition to give access to more talented racers come next year as she hopes it will serve as a starting point to success for young lads like her.

According to the Chairman of EYP, organisers of the marathon Mr Adeyemi Yusuf: “The marathon is to identify talents amongst youths who have interest in running. And going by the turnout of juveniles for this edition, and the emergence of the 7 year-old as champion of that category we are making progress with the marathon”.

“We, however hope to improve on the lapses we have noticed with this edition, and would do all that is necessary to have a better organised event next year”, Yusuf concluded.