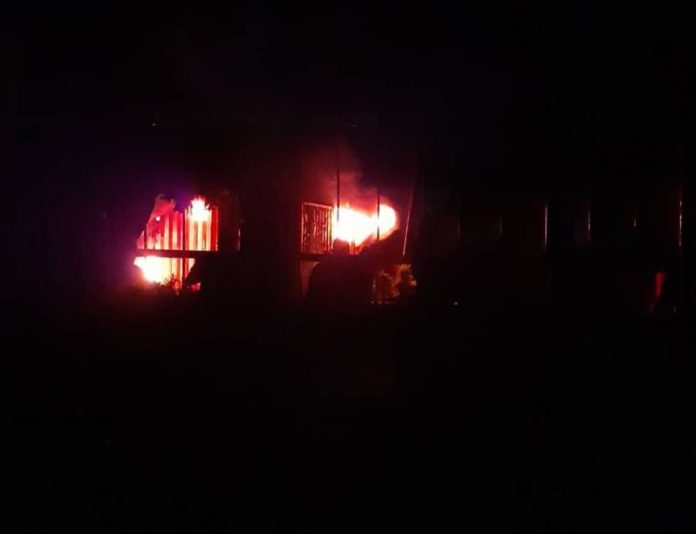 Inferno hits the franchise core of Ondo State ahead its governorship election as over 5,000 card readers belonging to the Independent National Electoral Commission (INEC) have reportedly been razed in an inferno that consumed Akure office of the commission

Mr Festus Okoye, INEC National Commissioner and Chairman, Information and Voter Education Committee, confirmed this in a telephone interview with the News Agency of Nigeria (NAN) on Thursday night.

Okoye, who was in Akure for some INEC preparations for the state governorship election scheduled for Oct. 10, said that the inferno started at about 7.30pm.

As at the time of filling this report, Okoye noted that efforts were still ongoing to put out the fire.

The cause of the inferno was not immediately known.

Okoye, however, said that the inferno would not affect the conduct of the state election as needed card readers would be mopped up from other states not conducting elections.

“The fire Service men are still battling to put it out and we are confident that it would soon be put out.

“This is just one state election. What we are going to do is to mop up smart card readers from other states and use them for the conduct of the election while investigating what happened.

“The cost of 5,141 smart card readers is so much, but we are not going to dwell on that now.

“What we are going to dwell on is to mop up smart card readers from other states that are not conducting elections and use them to conduct Ondo governorship election.

“We will dwell on other issues regarding the configuration of the cards readers.”

It will be recalled that 4,695 smart card readers were destroyed by fire that razed its facilities at INEC headquarters in Awka, Anambra in February 2019 barely four days to the Presidential and National Assembly elections.

There was also similar incident in 2019 at the INEC office in Plateau State and Abia State where its facilities including card readers were destroyed by fire, but the commission was able to handle the situations without disrupting the electoral process as planned. (NAN)

SARS Killed my Son Three Weeks Before Traveling to Europe For...