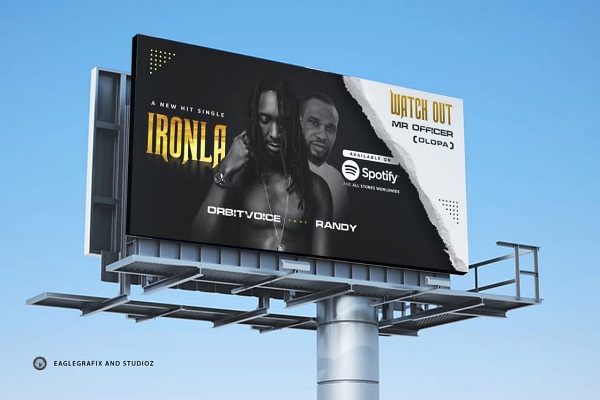 A Germany Based Nigerian Singer, Orbitz Voice has revealed the inspiration behind his hit song, “Iro Nla”. The Ondo State born entertainer while addressing a cross section of journalists, also share his journey into the competitive Nigeria music scene. Born to a civil servants parent, Mr & Mrs Adefulure, real names Adeyemi Adeniyi Adefulire while giving details of his parental and educational background said music is way beyond making money, it is the process by which the wrongs in the society can be addressed and turn right.

Hear him, “First of all, let me start by saying, my stage name is Orbitz Voice, I’m a Nigerian, I’ve been living in Germany for, let’s say two decades now, that’s close to 20 years. I’m a musician , I’m a writer; I’m a poet, I am just a Pan-Africanist. And I have the love of Africa in my heart. I hold a degree for Banking and Finance, from University of Ado Ekiti, now Ekiti State University. I have a new song titled “Iro Nla”, which is translated to Big Lie in English. “Iro Nla” basically is all about the lies people tend to you know, tell one another, we tend to impress others to make them feel good, “Iro Nla”, Which is translated to big lie in English, is like, trying to deceive, lie to other people, we need to be truthful to ourselves , that is what the song is all about”.

On how song writing and composing  started for him, “Music has always been a part of me. But you know, sometimes you don’t get to have to really get to explore yourself until it gets to a certain stage. Right from when I was young, I used to sing. But you know, I never took it seriously until last year, when people around me, my producer asked me, why are you not singing, you are very good, you got what it takes. And I just said okay, and that’s how it started. My kind of music is Afro jazz. Because if look at it. I mean, most African contemporary music, emanated from Afro-Beat because basically all of the sound comes from instruments you know, and from each instrument, you derive a melody. So basically, everything is from Afrobeat. So, that is the music I believe, cut across boarders in Nigeria and Africa. My music is informative, educative, entertaining and full of energy. It depend on how you can relate with it, if you say its political, fine, if you say, its social, marital, it’s alright, “Iro Nla” is a song with all sides of message, you decide your perspective” He noted. The song “Iro Nla” which is currently available on all digital stores worldwide was produced by Nigeria based music executive and sound engineer, Bakare Temitope aka, Randy. The video of the song will be shot in Germany and release to the public later in the year.

READ ALSO:  Why I Project Africa In My Music - Orbitz Voice, Germany Based Nigerian Singer

Assault Persons With Disabilities And Pay N1m Fine, Says Buhari As He Signs Bill Into Law

Emeka Ike Expose Those Responsible For His Downfall

My Body, Heart Not For Poor Men, It’s Strictly For The...