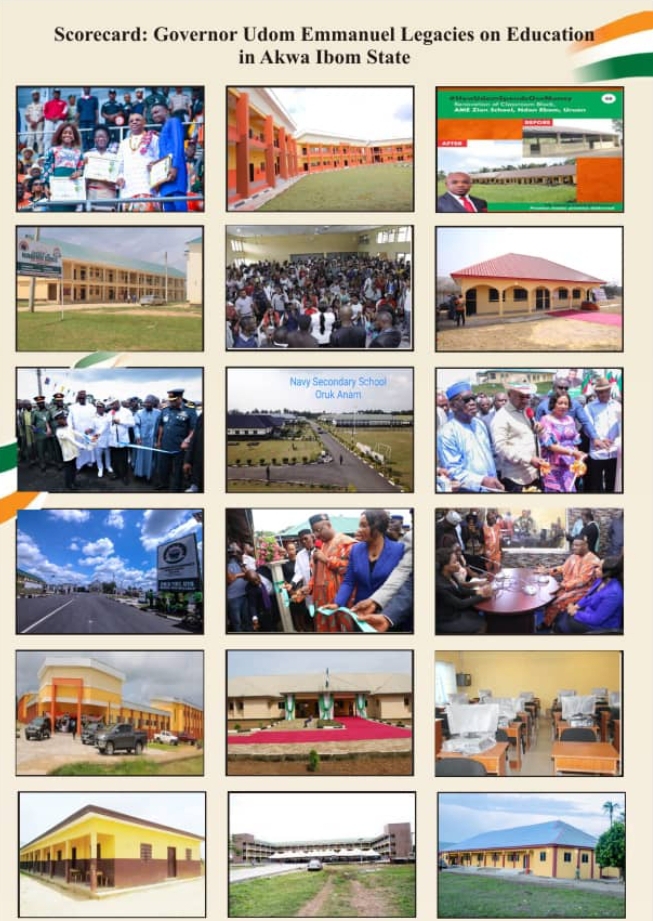 Education was one of the cardinal priorities of Governor Emmanuel Udom when he took over office in 2015. In the course of his seven years administration, several primary primary and secondary schools were built across the State

So many dilapidated school buildings were also renovated and rehabilitated. The aim of the Government according to the Governor is to give the pupils a conducive environment for optimal learning

In the course of his administration, Akwa Ibom recorded rising performance by candidates who took the West African Senior School Certificate Examination from 2019 to 2021.

The Commissioner for Education, Mrs Idongesit Etiebet recently said that the percentage of candidates who passed with credits in 5 subjects or more, including -English Language and Mathematics rose from 58.55 to 68.05 and 78.90, for 2019, 2020 and 2021, respectively, the figure for 2022 is still being compiled.

Indigent students were screened by showing proof of studentship and thereafter paid varying sums to pay their school fees.

The Tuition Intervention program is the first of its kind in Akwa Ibom history as part of the Governor’s commitment to ensure an educated citizenry.

In his effort at motivating their performances, Governor Udom Emmanuel has made the welfare of teachers in the State a high priority.

Akwa Ibom State teachers are one of the highest paid teachers in the country.

The governor during the activities marking the 35th anniversary of the creation of the State recently retrated his government’s commitment and resolve to make the State one of the most education advantage State in Nigeria.

Pressure In Delta State As Herdsmen Killed 2 Vigilante Men Over...

On Air Personality, Tushbee, Temitope Bilewu And Their Hearts of Gold