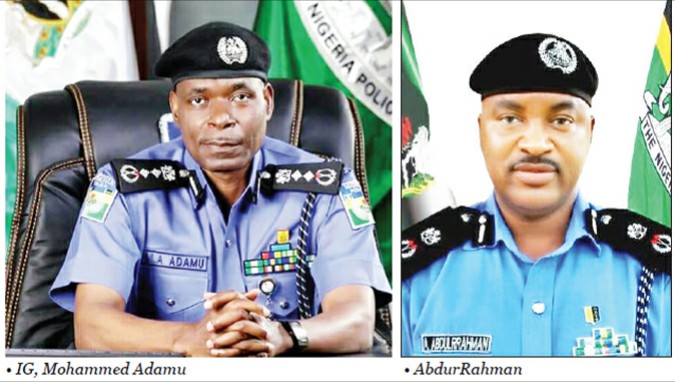 No fewer than seven houses and several vehicles were razed down by protesting youths of Oruku community in the Nkanu East Local Government Area of Enugu State on Sunday following the killing of the traditional ruler, Igwe Emmanuel Mba, by suspected operatives of the newly-formed police Special Weapons and Tactics Team.

It was learnt that a combined team of soldiers, policemen and personnel of the Nigeria Security and Civil Defence Corps had been deployed in the community to restore peace.

Punch gathered that the suspected SWAT operatives, led by one Inspector Danladi, shot the monarch while he was addressing members of his community at the town hall on Saturday and he bled to death before he could get medical attention.

The policemen were said to have arrested one Mr Agozie Ani, who was also at the meeting. Community sources told Punch that the policemen, who were in mufti and wielding AK-47 rifles, invaded the venue of the meeting in an SUV and a Sienna around 2pm on Saturday, adding that immediately they alighted from the vehicle, they moved into the hall and sought to see the monarch.

They were said not to have disclosed their mission, but rather sought to see the monarch. The policemen, according to one of the sources, were escorted to the town hall by three natives of Oruku identified as Emmanuel Nwobodo, Onyema Edeh and Sunday Onunze, who also left with the cops in the same vehicles.

They were reported to have come with the team and left with the cops when the atmosphere turned bloody. The source stated, “The traditional ruler was presiding over the meeting and the three natives pointed at him; immediately one of the policemen shot him on the thigh and he fell down and was bleeding.

“There was confusion after the monarch was shot. Everybody in the hall ran for safety as the armed men started shooting in all directions. Amidst the confusion, they made attempts to arrest some of those at the meeting.”

Another source told Punch that the policemen took the bleeding monarch and Ani to the Enugu State University Teaching Hospital, Parklane, when they noticed that Mba was dying, but the hospital refused to admit him and told the cops that there was no bed space.

“They were referred to the National Orthopaedic Hospital, Enugu, but on arrival, doctors at the Emergency Unit pronounced the monarch dead.”Another source told our correspondent that the policemen took the bleeding monarch and Ani to the Enugu State University Teaching Hospital, Parklane, when they noticed that Mba was dying, but the hospital refused to admit him and told the cops that there was no bed space.

“They were referred to the National Orthopaedic Hospital, Enugu, but on arrival, doctors at the Emergency Unit pronounced the monarch dead.”It was learnt that the traditional ruler, who was elected by his community on December 26, 2019, bled to death before he could get medical attention.

His corpse was deposited in the National Orthopaedic Hospital mortuary, while the whereabouts of Agozie was unknown as of the time of filing this report. A former Chairman of the Nkanu East Local Government Council, who hails from the community, Ejike Ani, confirmed the incident to Punch on Sunday.

Ani described the murder of the monarch as shocking and unacceptable to members of the community, and called for the arrest of the policemen, who participated in the murder.“Igwe Mba was murdered by men of SWAT from Abuja, who stormed the venue of our annual December 26 meeting being presided over by the deceased monarch,” he stated.

A community leader, Chief Eze Emmanuel, told Punch that he and other leaders of the community went to make enquiries at the state police headquarters to ascertain the identities and motive of the assailants, but they were told that there was no such entry made at any police station under the command.

As a result of the incident, aggrieved members of the community reportedly regrouped on Saturday and started burning the homes of some indigenes believed to be behind the murder. The burning of houses continued till Sunday afternoon when security agents were deployed to restore normalcy in the community.

Seven houses, including the compound of the father of a retired federal Permanent Secretary, Chief Raymond Okenwa, were reportedly burnt down. Some vehicles parked on the premises of the affected buildings were also set ablaze by the rampaging youths.

The state Police Public Relations Officer, Daniel Ndukwe, said in a statement on Sunday that normalcy had been restored in the community and that a comprehensive investigation had been ordered into the incident by the Commissioner of Police, Ahmad AbdurRahman.

Ndukwe stated,“Following the acts of violence that occurred in Oruku community, Nkanu East LGA of the state over the alleged shooting and death of its traditional ruler by armed men suspected to be policemen on December 26, 2020 around 4.30pm, normalcy has been restored after the Commissioner of Police, Ahmad AbdurRahman, promptly ordered the deployment of operatives of the command in the area and the launch of a full-scale investigation into the incident.

“The commissioner, while reiterating his commitment to meticulously investigate and bring the perpetrators of the alleged murder of the traditional ruler and the ensuing acts of violence to justice, has called on residents of the community to remain calm and eschew acts capable of further inciting violence in the area, while the investigation lasts. He warns that anyone found wanting will be made to face the full weight of the law.”

Why We Can’t Stop Kidnapping Ourselves In Nigeria – Wike

Federal Government Plans Next Round of COVID-19 Lockdown