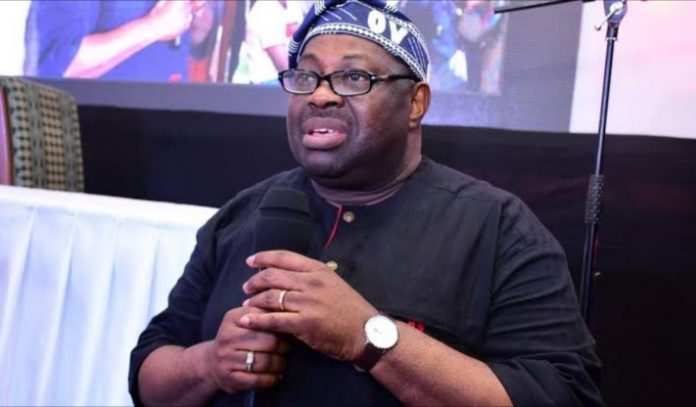 Popular Nigerian ‘Journalist’ Dele Momodu a.k.a Bob Dee means different things to different people. To some he is the archetypal grass to grace story whose palm kernels were broken for him by a benevolent spirit apologies to the late Professor Chinua Achebe. To others he is a mere glorified, competent hustler who managed to pass off public relations as journalism.

His Saturday Column in Thisday on November 6, 2021 captioned “The Unsolvable Jigsaw of the Ikoyi Tragedy’ was the zenith of insensitivity and sycophancy – the latter for which he is infamously known for.

Hear him “I had known Femi for over 20 years in London as an extremely gifted marketer. Femi’s tongue was honey-coated, and it was impossible not to like him,” Momodu said.

“We lost touch after I ended exile and returned to Africa, but he soon traced me to Ghana, and he came visiting. He was so happy to reunite with me. He told me how God had blessed him mightily and had made him veer into real estate in London. Femi was a genius who made stupendous gains from regenerating ghetto neighbourhoods in East London. He regaled me with tales of his exploits in the property business.

“He promised to build the classiest residential apartments in Africa. He said he was out to prove there was nothing the multinational construction companies were doing that his company can’t do. I have never seen such a level of audacity, determination and tenacity. Fourscore was a visionary and a missionary when it came to seeking to excel and do as well as his international counterparts at home and abroad. He had competed in their space, in their countries before, with moderate successes and did not see any reason why he could not replicate the same and attain loftier heights in his home country.

“If he made any mistakes, it was probably that he overstretched himself, but he was such an ambitious man, full of faith. And certainly not the greedy avaricious person that his traducers now suggest he is. In our country, mistakes are never excused, forgiven or forgotten. When you fail, you’re a villain and outcast. When you succeed, you’re a hero, genius and superstar.

“Out of the failing of Femi Fourscore would arise a Nigerian Neil Armstrong who will make building on the sea seem like strolling to the next street. That I believe is Femi Fourscore’s legacy, challenging us to believe that what may seem impossible is indeed possible by dint of hard work and if at first, you do not succeed, keep trying, because your time will come.

“I will never give excuses for Femi. He tried but he couldn’t unfortunately deliver on the tall and tough target he set for himself. I am pretty sure that it was not because he was cutting corners or taking risks. The block that fell was the one he intended to live in. No man would be prepared to be a kamikaze pilot in such a situation.

Momodu said the inquest and investigation ordered into the incident should be done diligently and not hurriedly.

“It must be painstaking and thorough. Such investigations cannot last thirty days as being directed by the government; I foresee that any credible inquiry must take months of arduous diligent work. Various possibilities including negligence, sabotage and even natural or human causes such as the over-dredging occurring in that vicinity must be considered. Dead men tell no tales. They cannot defend themselves, but records and logic abound,” he said.

“Those making claims and allegations which are easily rumpled will soon be exposed. I’d known that In February 2020 the third block was at the beginning of the foundation stage and the other two blocks were merely a few storeys gone. It is interesting that nobody who had any misgivings reported such to the Regulators. I say no more, other than that it is always convenient to cast aspersions when it seems there is no potential for the reply.

“What I know is Fourscore was a self-made man who depended on no godfather. Despite being a cousin of the vice-president, Professor Yemi Osinbajo, he was too proud and self-reliant to approach the vice-president or anybody else for favours of that kind. He never sought for or got any government contracts. He relied on his own ability, marketing skills and funds.

“It has been most painful reading how some people reduced Femi’s epic struggles and vision to fronting for the vice-president. For me, this is one of the tragedies of this unfortunate saga. The worst of them would be the number of innocent casualties buried in the debris with Femi.”

Momodu’s excuse for exonerating his late friend is that the latter in his opinion which is unverifiable since dead men tell no tales is that he planned to live in one of the flats. Bob Dee forgot to tell us that his late friend who had been exposed to the best building practices in the UK, US and South Africa where the systems work chose to cut corners in his native home out of avarice and the defective system which is oiled through bribery and corruption.

He is not concerned that 45 people lost their lives due to the nauseating morbid greed of his late friend and that the deaths were avoidable. Would he have sung the same song if a close relation of his was either killed or lost in the rubble?

I am not amazed by his defensive outburst as he has made an unenviable career of worshipping the wealthy not minding the source of their wealth and so like the proverbial Abobaku continued to wax lyrical for Osibona even in his grave. The story would have been different if the developer were to be a plebian or mendicant. How tragic! Even the Holy Bible which Bob Dee claims to read as a ‘Christian’ condemns the practice of mammon worship as it warns sternly ‘What does it profit a man to gain the whole world and lose his soul?’

At over 60, he has shown no signs of slowing down and is still chasing ephemeral wealth which all mortals would ultimately leave behind since the world is a mere market place and no man’s permanent home. Does he have time at all for critical introspection about his legacies as he definitely wouldn’t be psychically around in five decades time if he is even lucky to live that long?

Old habits die hard and you can never teach an old dog new tricks! The advent and popularity of social media as well as the internet has rendered his Ovation Magazine obsolete and having gotten used to the good life acquired on the strength of sycophancy, it would be suicidal for him to stop it as there is no pension plan to fall back on.

We recall when popular artiste Davido called him ‘my boy’ before his apology. This underscores the silent contempt that the elite have of him despite their pretentious show of love.

In a decent clime, his column in Thisday would have been pulled down and he would have been made to apologize for his cruel remark and disgusting pr gimmick for his departed friend. Alas we are in a third world jungle made so by corrupt leadership pervasive everywhere including in the media aided by enablers like Bob Dee.

Tony Ademiluyi is the Co Founder of The Vent Republic and can be reached on anthonyademiluyi@yahoo.com and 08167677075

I Am Not A Stakeholder in Lekki Toll Gate – Tinubu,...