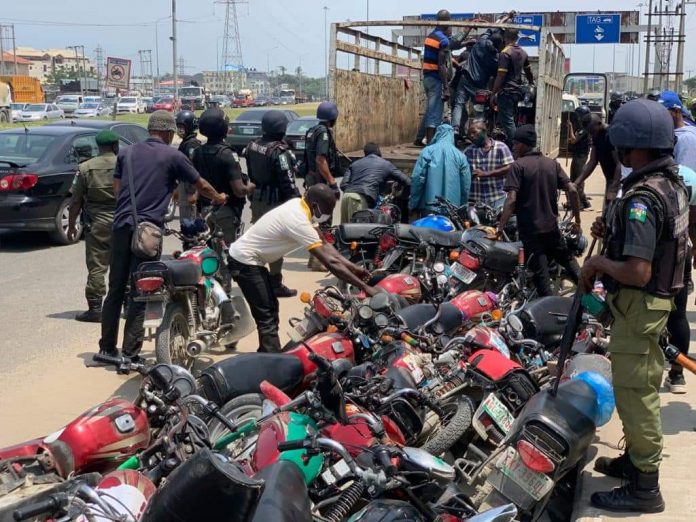 In furtherance of Lagos State Environmental and Special Offences (Enforcement) Unit (TASKFORCE) commitment to rid the State of criminals hideouts (blackspots) and menace of Commercial Motorcycles popularly known as Okada, illegal ticketers on the State’s Highways and free the state from menace of hoodlums and street urchins popularly known as area boys, the Unit commenced its tactical and strategic enforcement for compliance operations for the year 2022 this week, in order to nip in the bud every intending criminal activities and entrench total sanity in the State throughout the year, with a view to achieve the State’s vision of zero tolerance for criminal elements, hideouts (blackspots),Okada operation on restricted routes, and other environmental law offenders in the State.

Speaking today in his office at the Agency headquarters, Safety Arena, Bolade Oshodi,the Chairman of the State Taskforce,CSP Shola Jejeloye said that the Agency had busted some miscreants numbering about 150 at Allen avenue using okada operations as guise to perpetuate their nefarious activities. He said that no fewer than 60 of their okada were impounded and about 20 of the miscreant were arrested. Meanwhile, the Agency had also impounded 19 vehicles displayed for sale on walkways at Ladipo,43 Keke Marwa plying restricted routes on the highways were also confiscated,40 illegal street traders arrested will face the mobile court for prosecution sooner than later. Jejeloye maintained that the agency had started the year on a good note, and it is evident that year 2022 in Lagos is not a safe haven for criminals and environmental law offenders in the State.

READ ALSO:  We Are Not In Your Plans - Ijaw Youths Issues Warning To Oduduwa, Biafra Agitators

In a related development, operatives of the Agency arrested a 35 year old ex-convict, one Ismaila Salami who specializes in impounding commercial motorcycles, (okada) under the guise of being an official of the Agency.

The suspect was arrested at Oshodi on Thursday after he seized a bike from an unsuspecting commercial rider at Mushin and rode the bike down to Oshodi where he was accosted by Policemen attached to the Agency and questioned till he confessed to the crime.

He confessed to being an ex-convict who got into the business of swindling commercial riders right after he got out of the correctional centre.

He stated that this was his first time of operating alone as he has a gang of over five men who jointly go out on illegal patrols to impound Okada from their owners.“we do not get paid by the Local Government. We just go out on illegal patrols round our axis to see who we can arrest and bully till he parts with some money before we release his bike. We usually charge between 3000 to 4000 Naira per bike”

He further stated that the bare mention of the word “Taskforce” makes the riders succumb when arrested.

Recovered from the suspect is an ID card with the inscription ‘Mushin Local Government, Taskforce Okada Board”

He will be charged to court while investigations are ongoing to ensure that all other criminal elements who go about tarnishing the image of the Agency are arrested and brought to book.

CSP Jejeloye enjoined the general public to furnish the Agency with details of any illegal activities going on around their area. He further said that the Agency will come out with full force to make the State unbearable for any criminal and violator of the State environmental laws this year.

FG: Why Salaries Of ASUU Members Dropped After IPPIS Implementation