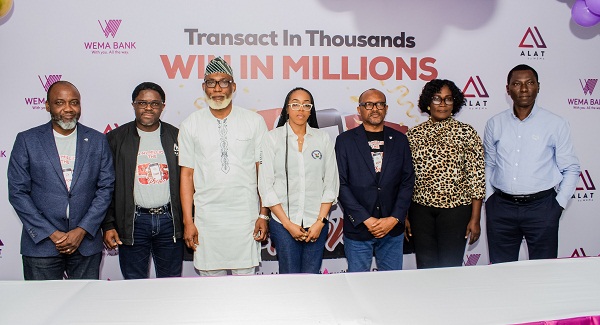 Abubakar Bisoye Bisi of Broad Street Branch, Lagos and Toyeeb Hussain of Ondo Branch emerged the two lucky winners of N1 million each. 55 other customers won N10,000 each, while another 20 others won N100,000 each in electronic draws conducted at the bank’s Head Office.

Season 1 of the promo began in 2021 as part of activities to reward its customers and encourage a healthy savings culture. This second edition closed the curtains on the second season of the 5for5 promo with an impeccable event line-up, social networking, and entertainment, which created a memorable experience for participants that participated physically in Lagos and virtually on Instagram Live on @alat_ng.

Speaking to pressmen during the event, The Chief Finance and Strategy Officer, Tunde Mabawonku, in his closing remarks, emphasized the uniqueness of the 5for5 promo grand finale, stating that it was designed to give a personalized feel to the event. “One of the highlights of the event is to remind our customers that the bank and all of the activities we host are designed to help them navigate the various financial services we offer and make their experiences the best in the history of the Nigerian banking industry,” he stated. “This is our way of thanking and rewarding customers for their loyalty.

Speaking further, he said, “This season’s grand finale has been a success, and it is already generating considerable interest in the banking industry and among shareholders.”

The Divisional Head, Retail Banking, Mr. Dotun Ifebogun, said the promo is a way of promoting the savings culture among customers as well as encouraging the use of the bank’s alternate digital channels.

He explained that participating customers needed to do five transactions using the alternate channels as qualification criterion.

During the cheque presentation ceremony, the newly appointed Managing Director, Moruf Oseni, expressed his unwavering faith in the promo event and its enormous impact on the banking community. In addition, he praised the efforts of the organizing committee, the able knights, and every other participant in the event’s success.

The stakeholders of the Nigerian banking behemoth Wema Bank praised the bank’s management and board for their shrewd leadership and customer-centric values, which contributed to the success of the second season of the promotion.

Wema bank pledges to return with a bigger and better third season of the 5for5 promo and urges customers to keep an eye out for this upcoming event and many other opportunities to improve their lives.

President Buhari Reveals What He Told Emir Of Qatar

BREAKING: If You Dare Me, I Will Release Evidence FG Printed...