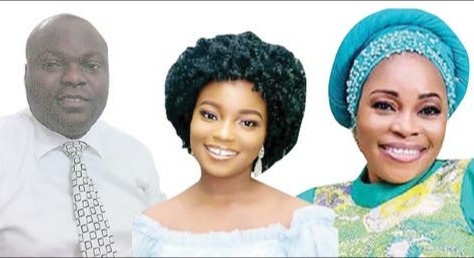 Victor Oyegoke, is a brother to Olalekan Oyegoke, aka Mayegun Olaoye, the father of gospel singer, Tope Alabi’s first child, Ayomiku. In an exclusive interview with Punch, Victor revealed more shocking details about the relationship between his brother and Alabi. Giving details of what transpired at a meeting held by top entertainment executives in 2018, he said.

“The meeting was attended by marketers like Wastayo (Wasiu Afolayan) and Millenium (Adekunle Owoade). At the meeting, Tope claimed that she did not tell Ayomiku negative things about her father. She said the girl was of age and could make her own decisions. She admitted that my brother did not offend her but she was the one that wronged him. She also said Soji often told Ayomiku about her biological father.

Tope was also asked why she changed the child’s surname to Alabi and she said it was because whenever they had to travel, she would have to provide a letter of consent from the child’s father. So, she said she changed her surname to make things easier. Even if a man wants to adopt a child, there is a legal process that ought to be followed, particularly when the child’s father is alive. Before she left on that day, she was asked to give my brother a phone number that he could reach Ayomiku on and she did. However, when my brother called her (Ayomiku), they did not get along well.

My brother was dating a lady called Bimpe and she was the one he initially wanted to marry. Tope and my brother met through the late actor, Alade Aromire. She was a member of Alade’s ‘Ori Ire’ caucus in the Yoruba movie industry. My brother used to be close to Alade, and he had a shop at Idumota (Lagos).

He always supported the movie industry. He met Tope at a movie location in Akure. He introduced Tope to me and some of our siblings but I didn’t think it was anything really serious. However, I was surprised when I later visited him in Lagos and met Tope in his house. I asked him about Bunmi who he had already been making marriage plans with but he waved my comments aside. He told us Tope was pregnant for him.

9th Assembly Leadership: There Is No Going Back On Lawan –...

I Will Be Cleared Of All Allegations Leveled Against Me, Reinstated...

Governors Have Politicised Most Universities In Their States – ASUU