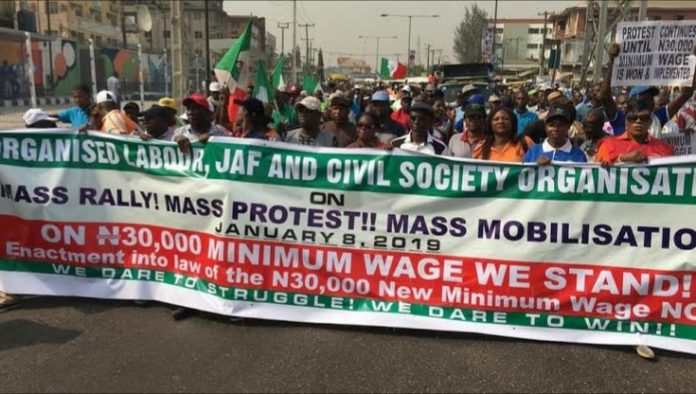 The Director General of the Progressives Governors Forum, Dr. Salihu Lukman, has described the nationwide protest by the Nigeria Labour Congress as unnecessary. He said this in an interview with newsmen in Abuja on Wednesday (today).

Lukman, who was until his full-time foray into politics, a high-ranking member of NLC, said the method being adopted by organised labour to press home its demand was outdated.

He maintained that street protest will have no effect on plans by the National Assembly to consider the bill seeking to decentralise the minimum wage structure.

Lukman said; “We are not saying they should not protest, but this protest is needless. I can guarantee that it is not going to stop the process in the National Assembly. It is not also going to take away the issue.

“We need to work with them to develop this democracy and we can only do that if every constituent unit and citizens in those units can negotiate with the constituent governments and get results.

“As it is, we are all frustrated and that is what we should be addressing. This ‘we against them’ that labour is creating does not exist.

“We should be applying ourselves to resolving the problems of this democracy. There are fundamental problems bigger than we can imagine.”

According to him, a system that imposes the same minimum wage regime on states irrespective of their revenue generation and capacity to pay was not sustainable.

He said it was no longer sustainable for poor states like Yobe and Zamfara to pay the same wages as Lagos and River.

READ ALSO:  Bauchi CP Reveals What Will Happen To DPOs Who Fail To Hang IG's Portrait In Their Officers

Lukman advised the NLC to improve on its negotiation skills to be able to constructively engage both the legislature and the executive on such matters.

He also stressed that it behoves on the NLC to address the issue of productivity among its members in order to justify demands for wage increases.

Landlady In Police Net, After Killing Tenant Over Pot In Ondo State

INSECURITY: Give Buhari More Time, He Will Soon Deal With Criminals And Their Sponsors...

No More Petrol Subsidy, It’s now a thing of the Past...