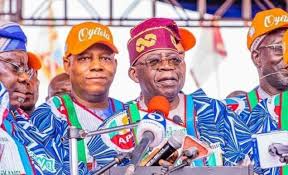 Ahead of the 2023 presidential election, a group under the platform of Nigerians in Diaspora Organisation Belgium and Luxembourg has backed the All Progressives Congress, APC Muslim-Muslim ticket.

The group said there was nothing wrong in the ticket of the same religion as long as the APC presidential candidate and his running mate were capable of doing the Nigerian job.

The Chairman of the group, Mr Bayowale Adekeye , who spoke with journalists on Saturday, said those politicians and a section of the media who opposed same religion ticket were doing the country a disservice.

Adekeye said, “For some of us who have been monitoring recent developments, this debate comes as no surprise. Having clearly seen that the erstwhile attack on the APC Presidential candidate’s credentials was not gaining traction, and seeing that his running mate had a proven track record of being a progressive, detribalised politician, the only card left for those against the candidate was the religious card.”

“I personally think Asiwaju Bola Ahmed Tinubu’s choice of His Excellency Senator Shettima as his running mate was a master stroke. Senator Shettima has a proven track record of being a progressive politician who believes in the Nigerian project and you can tell he complements Bola Tinubu very well.”

On the move by some APC members who are Christians leaving the party as a result of the same ticket issue, the Belgium-based APC chieftain maintained that the nation had sound electorate mature enough to decide what political party they will be voting for based on the credentials of and policies proposed by the candidate.

“By the way, our nation has been bugged by many problems in the last few years and we know that even with its best efforts, this present administration has not met some expectations.

“So, any APC member who now leaves the party based on this issue of ticket is plain dishonest. I can list tens of issues that could make any principled politician leave the party, this ticket is definitely not one.

He stated: “And the same people leaving the party on this issue don’t see the hypocrisy when they have Christian-Christian or Muslim-Muslim tickets in various states. I have had the opportunity to talk to a few people who feel strongly about the same religion ticket and I have always asked, can you identify any area of government where your religious liberty is threatened by a joint Muslim ticket? Healthcare, Infrastructure, Education, Economy, name it.”

Tragedy of Serving a Dictator, The Case Study of Tolu Ogunlesi – Tony Ademiluyi

Your Disunity Policies Is The Reason Why Nigerians Are Killing Themselves – PDP Slams...

We Will Be In Abuja Together For Your Inauguration – Alaafin...

Kwankwaso Will Cut Down The Cost Of Governance When He Takes...