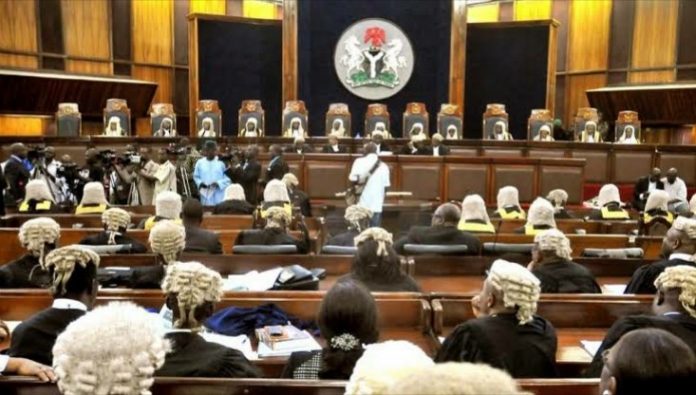 The usual eruption into jubilation within and outside courtrooms following victorious judgments was absent when the Presidential Election Petitions Tribunal on Wednesday in Abuja delivered its verdict affirming President Muhammadu Buhari’s success at the February 23, 2019 poll.

The courtroom was filled with Buhari’s loyalists led by his Chief of Staff, Abba Kyari. The judgment was also aired live.

Many, who could not gain entry into the courtroom, were seen monitoring proceedings from their car and others on the phones. Despite these, no jubilation was observed among many of Buhari’s supporters that could be among them.

Apart from the exchange of warm glances among the top supporters of the President, no serious jubilation was observed among those favoured by the verdict as it characteristically happens in high-profile cases as the one challenging the election of a sitting President.

The prominent politicians arrived at the venue of the tribunal between 8 am and 9 am. However, the Minister of Sports and Youth Development, Sunday Dare; and Minister of State for Transportation, Gbemisola Saraki, arrived over 30 minutes after the court session had begun.

READ ALSO:  Those Criticizing Me Are Not God - Singer, Mr Real

The two ministers were therefore compelled to sit outside with their entourages, watching the proceedings onscreen in the gallery alongside other stakeholders.

Meanwhile, there was heavy security presence at the venue, including scores of police officers, several of whom were heavily armed and clad in bulletproof vests, and several Department of State Services officers.

About an hour into the session, a convoy of three black vehicles without number plates rode onto the premises led by about eight siren-blaring motorcycles, whose gear resembled those of the presidential motorcade.

A security officer at the venue told Punch that the motorcade was conveying the Vice President. However, the convoy did not stop at the entrance of the venue. It took a route that led to the back of the venue.

Shortly after, the APC and the PDP national chairmen exited the courtroom and headed for the rear of the building. Some of the security personnel and spectators speculated that the party leaders had gone to meet the Vice President, who allegedly did not want to make an appearance at the court.

I Will Solve Apapa Gridlock In 100 Days – Sanwo-Olu