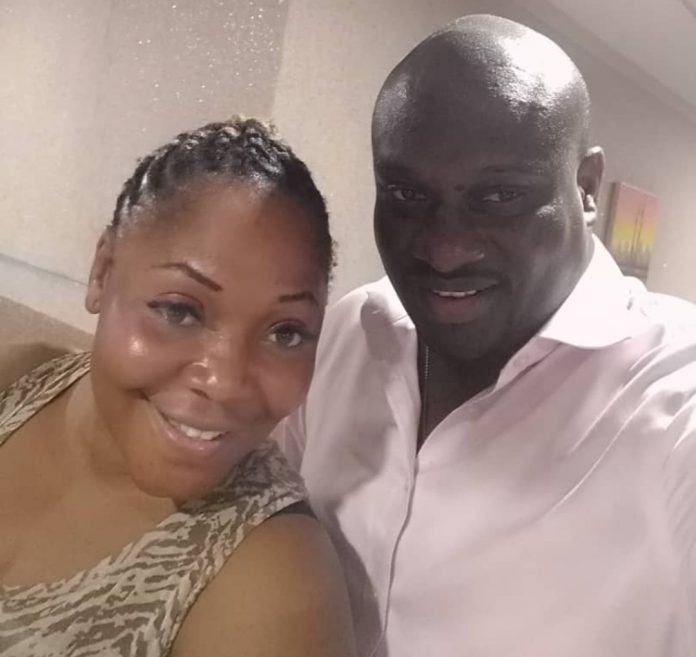 Nollywood actress, Ola Samuel aka Ola Iberu, is emerished in dirty fight after been acussed of dating her fellow colleague in the industry, Prince Akande Jimmy Roland popularly known as JimmyRoland.

According to a very close source who witnessed the show of shame that played out in film location in Ajilete of a movie shooting titled ” Oladunjoye”, the scenerio look more like a well script movie from Nollywood.

Becky, who ignited the brouhaha claimed the handsome actor who is from a royal family in Ikole, Ekiti state, is dating Ola Samuel, and when she stormed the location she went straight to Ola Samuel who didn’t alter anything even as the lady was aggressive. Becky who is said to be dating Jimmy Roland, was shouting on top of her voice which attracted other cast on set calling her supposed lover (Prince Akande) a deregulate names saying he has been sleeping with Ola Samuel.

“It was a bad and ugly scenario to behold. It was like a film scene. The lady (Becky) in question, we are made to believe has been sniffing a love affair relationship between her lover man (JimmyRoland) and Ola Samuel; so its like she monitored both of them to the location of this particular movie set( Ajilete) And Ola Samuel was very matured with the way she acted , she didn’t react or say anything even as the lady was shouting on top of her voice which attracted other actors on set”, explained the insider who doesn’t want her name in print.

When Ola Samuel was called to comment on the issue she declined. ” I am so sorry I can’t say anything on that for now, Please” she politely refused.

READ ALSO:  I Owe No One Explanations Over Ambassadorial Appointment - Buratai, Says He Served Nigeria Well

Prince Akande Oluwaforijimi Rolland (JimmyRoland) started acting in 2011 but left Nigeria to Malaysia. In Malaysia he acted in a movie titled ” Omo Ola” alongside Saheed Osupa before he returned to the country last year.

He was introduced to acting by his childhood friend, Temitayo Badmus whom they both trained under Baba Sokoti. His first movie was ” Nkan Egbin”.

The talented and handsome actor who has acted in more than 10 movies this year we learnt is planning to produce 2 movies before the end of the year even as he always claimed in interview that Ninalowo is his role model.

When a call was put to JimmyRoland to speak on the show of shame his supposed wife displayed, he was not picking his calls

He also failed to respond to chats on his Instagrams’ handle: jimmyrolland00 and prince.dumalay. He failed to acknowledge or reply the messages.

His Facebook: Akande Oluwaforijimi Rolland was equally not attended to.

BREAKING: CCT Withdraws Arrest Warrant Against Onnoghen As He Pleads Not Guilty

My Marriage To Tonto Dikeh Became A Nollywood Movie – Olakunle...