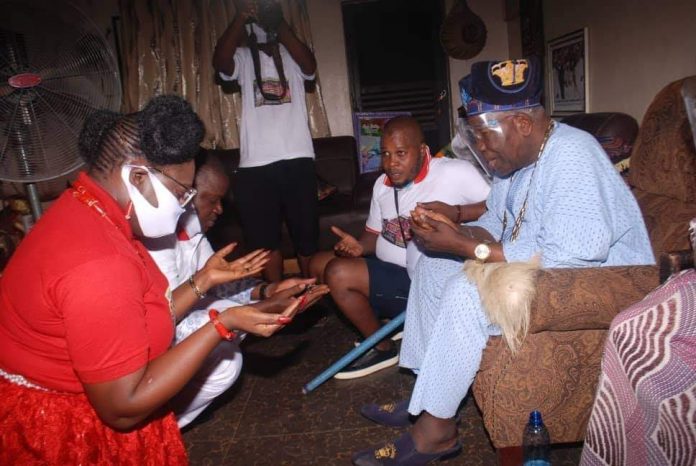 Nollywood actress and philanthropist, Amb Queen Blessing Ebigieson, has condoled with the family and kingdom of Olubadan of Ibadan, His Imperial majesty OBA SALIU AKANMU ADETUNJI, over his death, adding that Kabiyesi would be remembered for the many lives touched through his lifetime,

Ebigieson who noted that her foundation, Queen Blessing Ebigieson QBE Foundation, was hosted by the paramount ruler, Oba Adetunji at the Popoyemoja Palace in Ibadan, last year February of the annual widows empowerment program.

In a statement released and signed by the actress, movie producer and vice-president of Association of Movie Producers (AMP), she said she and her foundation mourns the death of Aje Ogunguniso I- Olubadan of Ibadanland who joined his ancestors “according to the Aremo oba Prince Adetuji Rahim, who is my close friend, confirmed to me that Kabiyesi passed on this morning and would be buried by 4pm today according to Islamic tradition, may kabiyesi soul rest in peace, he would be remember for the many lives touched through his lifetime.

“You would recall that Queen Blessing foundation 7th edition of the widows support program was held in Ibadan on the 14th of February 2021 at the palace of Olubadan with kabiyesi as chief host, Kabiyesi was also presented with the Queen Blessing foundation lifetime Achievement Humanitarian Ambassador award for 2021, for his selfless service to humanity, May God give the family the strength to bear the loss.

“Once again our condolences from all of us @ Queen Blessing Foundation” she said.

READ ALSO:  A unique school where only children of the poor are admitted

Cars, Houses, Phones, Laptops, Others Up For Grab As FG Lists...

When I Become Governor, I Won’t Allow Tinubu To Control Me...

Nollywood Actress, Remilekun Ayodele in Cloud 9, As Colleagues Gather to...

I Have Slept With Nigerian Senators And Church Ministers – Nigerian...

Restructuring Can Not Work Without The National Assembly – Tambuwal