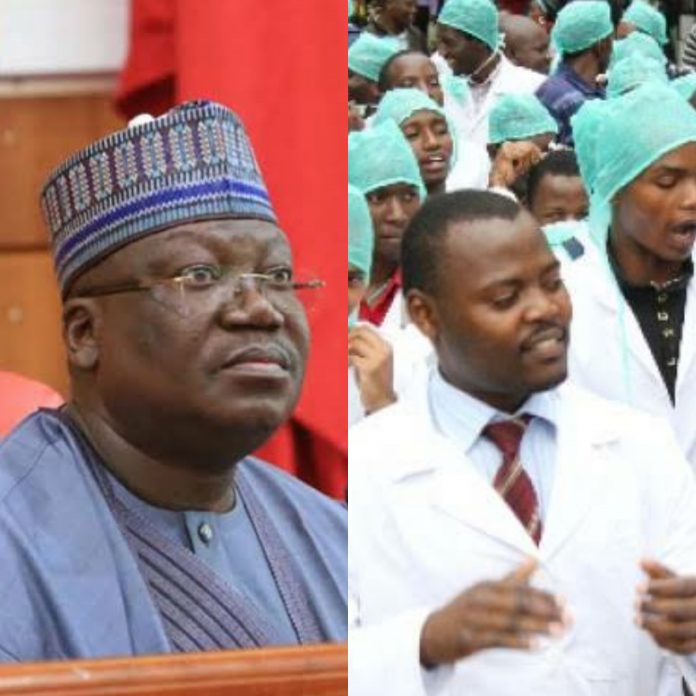 On April 1, members of the Nigerian Association of Resident Doctors (NARD) embarked on an indefinite strike to protest their poor remuneration and conditions of service, just five months after their last strike in September.

When the fresh strike was first announced, Uyilawa Okhuaihesuyi, president of the association, accused the federal government of failing to meet their demands, most of which were contained in an earlier agreement.

He had said the doctors are demanding: “Immediate payment of all salaries owed to all house officers including March salaries (regardless of quota system) before the end of business on the 31st of March 2021; immediate payment of all salary arrears including March salaries for our members in all Federal (GIFMIS platform) and State Tertiary Health Institutions; upward review of the current hazard allowance to 50 percent of consolidated basic salaries of all health workers, as well as payment of the outstanding COVID-19 inducement allowance especially in State owned-tertiary institutions.”

The industrial action has grounded activities in some hospitals across the country, at a time when Nigeria is fighting the COVID-19 pandemic that has killed more than 2,000 people out of the 163,000 infected.

Okhuaihesuyi confirmed to TheCable that for all the risks they face fighting COVID-19, all the doctors get as hazard allowance is N5,000 ($13 at the current official exchange rate).

Agwu Nnanna, the immediate past president of NARD at the Federal Medical Centre (FMC), Lokoja, told TheCable that the money is next to nothing, when the actual risks the doctors face are considered.

In direct contrast, each senator gets as much as N13.5 million as running cost covering all their allowances, while a member of the house of representatives get N8.5 million for same.

This is notwithstanding that 83 million Nigerians are living in poverty, while the country’s unemployment rate hit a new record high at 33.3 percent in fourth quarter of 2020.

HOW SINCERE IS THE GOVERNMENT IN ADDRESSING THE DOCTORS’ DEMANDS?

The doctors’ grievance is quite understandable. Despite being in the frontline of Nigeria’s response to the pandemic, things appear as though they are being taken for granted.

In an interview with TheCable, Okhuaihesuyi said the doctors are angry because despite several promises from the government to meet their demands, there has been no effort to fulfil them.

“The government does not honour their memorandum of understanding, so that is one of the major reasons we are where we are,” the NARD president said.

However, the federal government, on Wednesday, pleaded with the doctors to suspend the planned industrial action as it has “started solving the issues”.

Chris Ngige, minister of labour and employment, who made the appeal had said: “We have started solving your (doctors’) issues. We put up proposals with given timelines on how to deal with them.”

Interestingly, the minister has also started threatening the doctors, saying he would implement the ‘no work, no pay’ policy if they refuse to resume work.

EVEN MR. PRESIDENT TAKES CARE OF HIS HEALTH ABROAD

Menwhile, as the doctors announced that they were embarking on strike, the presidency disclosed that President Muhammadu Buhari will be jetting off to the United Kingdom for a medical checkup.

That trip, on Tuesday, was his fifth medical trip abroad. Altogether, TheCable found he has spent at least 171 days treating himself abroad. Meanwhile, Nigerian hospitals continue to struggle with inadequate funds.

In April 2020, while speaking on his role as the chairman of the presidential task force on COVID-19, Boss Mustapha had said he never knew how bad the situation was in the hospitals until then.

“I can tell you for sure, I never knew that our entire healthcare infrastructure was in the state in which it is until I was appointed to do this work,” Mustapha, who is also secretary to the government of the federation, had said.

It is day six of the strike and while Buhari is somewhere in the UK undergoing “routine medical checkup”, patients are being deprived of healthcare services in various hospitals — in the middle of a pandemic.

Body Bag Threat: What European Union Must Do To El-Rufai –...