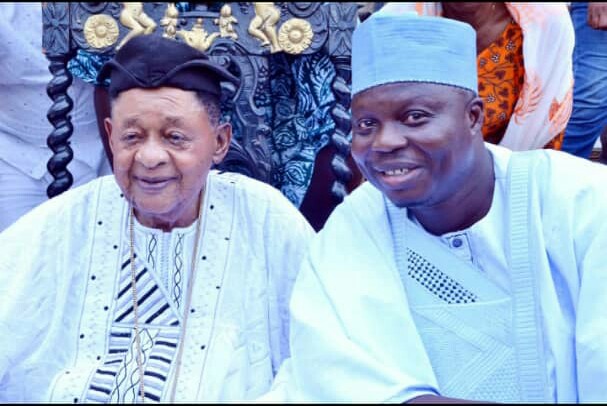 It was another feat and indelible mark in the history of theatre and motion pictures known for his efficient, effective and good performance and leadership as The President of the most populous and notable Theatre Organization in Nigeria and Overseas Tampan, in person of Otunba Bolaji Amusan aka Mr. Latin led the delegation of his Central Working Committee members, notable elders and members of this great association to pay homage to the paramount ruler of Yoruba land.

The team which consist the President himself, Otunba Amusan, also had Otunba Adebayo Salami who is the Chairman of the Board of Trustee. Latin informed His Imperial Majesty that the present executives came on board on 14th December, 2018 with a lot of unresolved issues. Mostly as some of its members on sick bed that are always canvassing for financial assistance from members of the public. This, the president explained didn’t go down well with him and his executives.

“We are introducing Health Management Scheme for members, wherein over 2000 members were registered for this scheme which will make people with proven integrity and good character associate with our association and all its programmes.” Latin intones.

Latin did not failed to acknowledge the support from His Imperial Majesty whom he said has been supporting this association from inception. After careful and adequate deliberation with the National Executive Council members and the member of the Board of Trustees of this association, he therefore, by the power conferred on him as the President of this Association conferred on His Imperial Majesty the LIFE ROYAL GRAND PATRON of TAMPAN WORLDWIDE

The presentation and decorations of His Imperial Majesty were done by Chief Mrs. Folakemi Aremu and the President of the Association respectively. High Chief Lamidi Oyewole, the Same of Oyo thanked the association on behalf of kabiyesi, the wives, Oyomesi and the entire Oyo people.

The Deputy President, Alhaji Abiodun Olanrewaju then announced that the official decorations/investiture shall be done during Tampan National Conference coming up on 11th December, 2019.

In his response, His Imperial Majesty Oba Dr. Lamidi Adeyemi appreciated Tampan for the gesture and honour bestowed on him and he went further to praise the President for being taken the right decision at the right time.

Kabiyesi recalled the history of Yoruba from inception towards genital inheritance that it is through genetic inheritance that extends towards chosen him as Life Royal Grand Patron of Tampan. He went further that Yoruba culture is unique when we talk about its contents, cosmology and the acceptability of its diversification of languages, dress, food and religion and that preservation and sustainability of language remains this Association watchword.

He talked extensively on film making and promise to assist the association both morally and financially whenever the need arises. Kabiyesi later prayed for the members of the association and applauded the President for the wonderful presentation of Award bestowed on him.

Alhaji Babatunde Bamgbode gave the vote of thanks by appreciating Kabiyesi, Oyomesi, wives and the entire people of Oyo kingdom for the warm reception exhibited.

I Am Not Dating VP, Osinbajo – Actress, Toyin Abraham