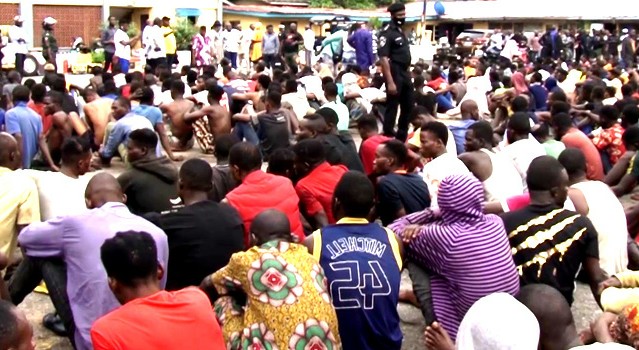 The police in Lagos have begun the arraignment of all suspected hoodlums arrested in connection with the mayhem unleashed on the state in the aftermath of the Lekki tollgate shootings at #EndSARS protesters by soldiers.

No fewer than 520 suspects were arrested by the police in relation to arson, murder, stealing and assault, among others. The Police Public Relations Officer in Lagos, Muyiwa Adejobi, told Punch on Wednesday that over 200 of the arrested 520 suspects had been arraigned.

However, our correspondents gathered that the suspects were returned to the police cell after their arraignment in court, instead of being remanded in prison. It was gathered that the Nigeria Custodial Service declined taking in the suspected hoodlums for challenge of space in view of the COVID-19 pandemic.

Adejobi said, “We have commenced the arraignment of the 520 suspected hoodlums. We have been sharing the suspects to various facilities because it is a state command’s case and the state command has the right to keep the suspects in any of our stations.”

Adejobi said rejecting of suspects by the custodial centre was not peculiar to the suspected hoodlums. He said, “The procedure is that whenever we charge suspects to court, they are always remanded in police facilities because of COVID 19. So, the next thing we do is to get them tested for COVID-19 after which they would be received at the correctional centres.”

When contacted, the spokesman for the Nigeria Correctional Service in Lagos, Rotimi Oladokun, said he was not aware that the suspected hoodlums were turned back, but said there was a standing rule that suspects must first run COVID-19 test before being admitted into correctional facilities.

Oladokun said, “We have an understanding with all critical stakeholders in the administration of criminal justice in Lagos State. Once the court gives an order for remand, the Lagos State Government conducts COVID-19 test on them. Once they get negative result, they bring them to us. Those who test positive, the government takes them to the treatment centre and upon a negative result, they bring them to the custodial centre. “The issue of rejection does not arise. That is not factual.”

I Don’t Have Any Intention To Running For Any Office In...

Why The Supreme Court In Nigeria Does Not Have a Functional...