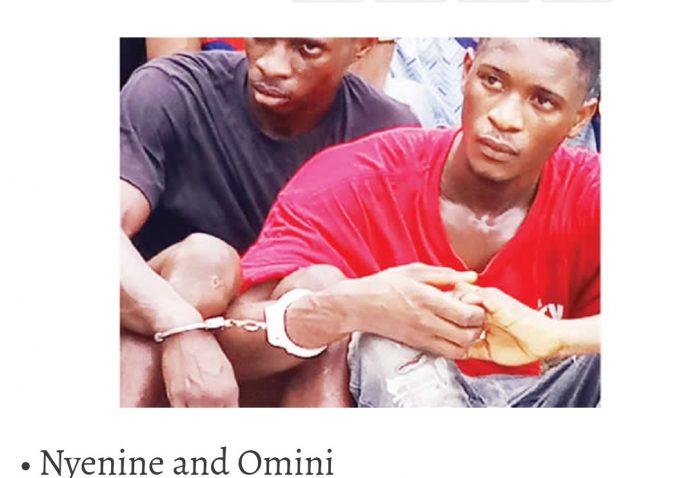 A teenage robbery and murder suspect, Mighty Omini, has disclosed that he was promised N500,000 to drive away the car of a woman, who was raped and murdered in Calabar, Cross River State a week ago.

He made the disclosure on Tuesday in Calabar while being paraded alongside his suspected accomplice, Godwin Nyenine, as well as 28 other suspects arrested for various offences such as rape, drug peddling, cultism and child trafficking, among others.

Two other masterminds of the rape and murder of the woman, identified simply as Mrs Doris, were said to be at large.

Doris was allegedly raped and murdered by a four-man gang on April 13 in her home at the State Housing Estate in Calabar.

“The leader of the gang, Udobong, said there was a car I would drive out of his compound and he would pay me N500,000.

“We are just getting aware that the woman is dead. I feel very bad. If I knew that someone’s life would be involved, I wouldn’t have done it, because I have a younger one and a mother, who is young.”

Nyenine simply said, “I came with this one (Omini) that drove the car. He just told me to escort him.”

The state Commissioner of Police, Sikiru Akande, who paraded the suspects, said Omini and his gang stole some valuables and an unregistered Nissan Sentra belonging to Doris after killing her.

Why ‘Mimi’ The Movie Is Premiering At The Beach, Following Successful Trailer Release

What I Will Do In My Next Appointments – Buhari

Russia Is a Virgin Land for New Businesses and a Non-Racial Country – Nigerian...

Don’t Get Mad Get Even: Femi Jacobs And Nancy Isime Getting Married?