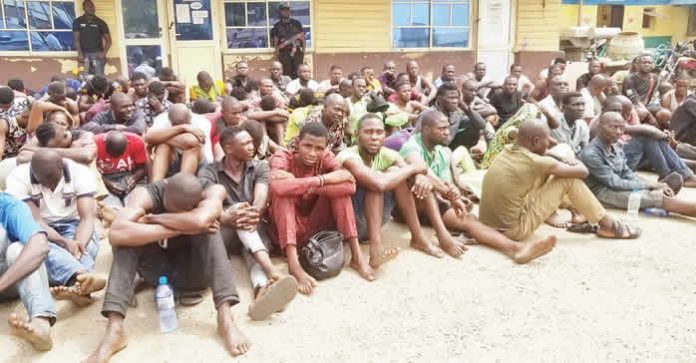 The Lagos State Police Command, on Wednesday, said it had arrested three suspects, Paul Peter, Rasaki Ibrahim and Damilare Abimbola, for allegedly killing one Kayode Babalola in the Alapere area of the state.

The state Commissioner of Police, Hakeem Odumosu, said Babalola was on his way to a vigil when he was attacked and dispossessed of his valuables, adding that the suspects subsequently threw him into a canal.

The CP, who addressed journalists on Wednesday during a parade of suspects, stated, “On December 11, 2019, one Kayode Babalola, 50, who left his office at Oregun in the Ikeja area for a vigil at a church in Ketu was attacked on a street in the Alapere area by the trio of Paul Peter, 22; Rasaki Ibrahim, 22; and Damilare Abimbola.

“He was dispossessed of his two phones and other personal effects before being conveyed in a wheelbarrow and thrown into a canal. The body of the deceased is still missing. The suspects have confessed to the crime. They will be charged soon.”

Amina Zakari Will Have No Business With Election Results – INEC

Atiku Will Sell Nigeria If Elected As President – Oshiomole