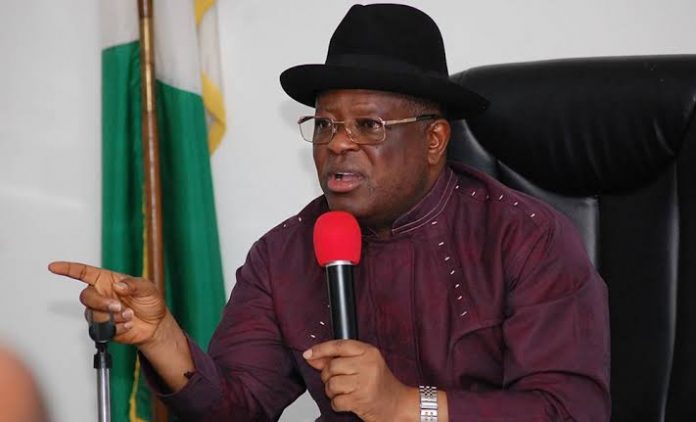 The Ebonyi State Governor, David Umahi has vowed he will contest the All Progressives Congress-ordered fresh primaries for the Ebonyi South senatorial zone.

This was as the governor alleged the senatorial candidate of the party in the zone, Ann Agom-Eze, was embarking on a campaign of calumny to curry cheap sympathy from unsuspecting members of the public.

Umahi’s Special Assistant on Media and Strategy, Chooks Okoh, stated this in a statement, on Thursday, adding that the governor was poised to contest the fresh primaries, billed for Sunday, July 31, 2022.

The statement read, “The attention of Ebonyi state Governor has once again been drawn to the bizarre antics of Mrs Ann Agom Eze in her quest to keep deceiving the public and gain unmerited sympathy in a bogus attempt to fly the APC flag as the candidate for Ebonyi South Senatorial zone.

“While the society was still grappling with her perjury tantrums to a revered court of law, she is again employing primitive tactics and resorting to crude self help in a bid to clinch a mandate she has no claim to, anyhow.

“In a most provocative and highly contemptuous letter addressed to the Chief Judge of the Federal High Court Abuja, Mrs Agom Eze went hallucinating about an imaginary court procedure and how it will end, raising disparaging insinuations against the governor in the process.

“The Governor would have ignored the letter and its puerile contents but for the fact that silence is thought to mean consent in our society.

“The general public is enjoined to disregard these deliberate concoctions and misleading rants from a woman who had sought to represent a people, got rejected but is now bent on showing them the rough edges they would have gotten from her.

READ ALSO:  Buhari Should Not Be Allow To Continue In Office - Peter Obi

“For the avoidance of doubt, Governor Umahi is ready for the Ebonyi South Senatorial APC rerun elections set for Sunday, 31st July, 2022 where he hopes to receive the nod of his party to stand in the 2023 elections as their candidate in that senatorial zone.

“The general public, and the judiciary in particular, are enjoined to disregard and totally ignore the veiled blackmail and an attempt to be a senatorial candidate by hook or crook instead of through known standards.”

A Federal High Court sitting in Abakaliki, had last Friday, disqualified Governor Umahi and averred that Agom-Eze, who was the second runner-up in the May 28, 2022 primaries, be allowed to contest the 2023 senatorial election.

It was reported that a document signed by the APC Chairman in the state, Chief Stanley Okoro-Emegha, stated that the party would hold the ordered fresh primaries, on Sunday, July 31, 2022.

But Agom-Eze, on Wednesday, appealed the order of the Federal High Court, for a fresh primary to admit new aspirants.

I’m Taking A Break From Music, Says Wizkid As He Reveals Next Action

Aliyu’s Release: No Cause For Celebration – Northern CAN Tells Buhari

You Must Produce Server Used For 2019 Elections – Peter Obi...

APC Membership Revalidation Necessary, Those Opposing It Have Hidden Agenda –...