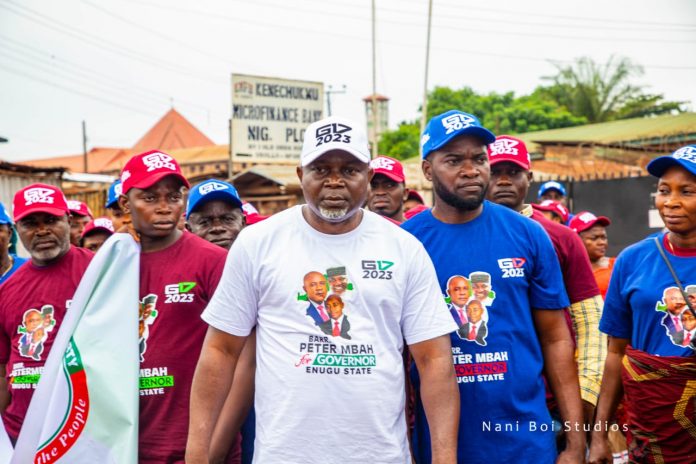 An Enugu State political group, G17 has organized a mega rally in the state to show their appreciation to Governor Ifeanyi Ugwuanyi for his loud achievement in the last six to seven years, the rally was also hold to pledge their support towards the Governorship Candidate of the People’s Democratic Party PDP, Barrister Peter Mbah and his deputy, Ifeanyi Ossai.

In a statement sent to Zebra News, G17 while describing the two in one event as a memorable one, said the group will continue to do everything within it’s power to ensure continuation of good governance in Enugu State; Below is the full statement.

Certain Days and dates come and go but their significance remain and the 29th day of June, 2022 is one of such days. It is a day that the G17 family in Enugu State, in Udenu and all the PDP faithful in Udenu local Government Council will not forget in a hurry.

It was a dual function. First there was a mega rally to thank His Excellency Dr Lawrence Ugwuanyi the Governor of Enugu State who incidentally is the grand patron and especially for his choice of PDP flag bearers, Dr. Barr Peter Mba for Governor and Barr, Ifeanyi Ossai as Deputy Governor.

The rally started from Obollo Agu in Obollo Afor round about down to the local government headquarter.

The Second event was the formal inauguration and swearing in ceremony of the Local government and Ward Executives of G17, The event was uniquely packaged by the Local Govt. Coordinator Hon, Agbo Kevin (Major) and Director Engr, 0do Livinus(White Concept)and Sponsored by the Executive chairman of Udenu Local Government Area. Hon. Onah Solomon(Jack Solo).

BREAKING: Gunmen Currently On Rampage In Some Parts of Awka