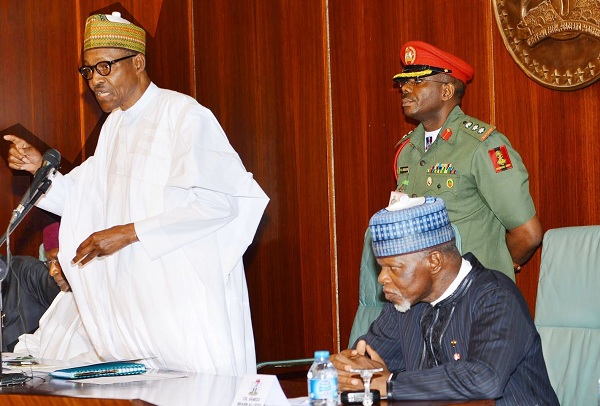 President Muhammadu Buhari on Monday defended the temporary closure of the country’s land borders, saying that it had reduced domestic fuel consumption by 30 per cent.

Buhari, who said there had yet to be any decision on when the borders would be reopened, said deep rooted dishonesty made the Federal Government to close the borders.

He, however, said farmers were among the biggest beneficiaries of the government’s decision to close the borders, which had led to a remarkable drop in the smuggling of goods, especially rice.

Acknowledging the efforts of farmers, Buhari said, “Farmers must be protected. Dishonesty is deep-rooted in the country. Otherwise the border closure would not have been warranted.”

Buhari was speaking in Daura, Katsina State, when a delegation of Katsina State Elders Forum visited him at his country home.

“The President said the country’s domestic fuel consumption had dropped by more than 30 per cent, following closure of land borders”, a State House statement by his media aide, Mr Garba Shehu, quoted the President as saying.

The statement added, “The President commended the actions taken by the President of Niger Republic, Muhammadou Youssoufou, including the dismissal of officials and a ban on use of the country as a dumping ground for Nigeria-bound smuggled goods.

“President Buhari noted that the measures taken by the President of Niger were helpful and supportive. “President Buhari acknowledged the hardship of border communities following the ban on sale of fuel at stations 20 kilometres to the border, a restriction that also saw to the closure of all fuel stations in his native home, Daura.”

He stated that the Nigeria Customs Service was reviewing all border outlets in a bid to identify the illegal routes used for smuggling and those officially recognised for genuine transactions.

“President Buhari told the delegation that he intends forging ahead with poverty alleviation schemes and the agricultural and livestock reforms started by the administration in the first term, since the election was behind him and a government now in place.

“He explained that the reforms, especially those relating to the settlement of livestock herders would take time to accomplish, assuring that his deliberate choice of tested farmers as his past and current ministers of agriculture was informed by the need to carry his vision through”, the Presidency added.

The Chairman of the Elders Forum, Alhaji Aliyu Saulawa, earlier thanked Buhari and Governor Aminu Masari for combating banditry, kidnapping and cattle rustling. The group urged the President to come to the aid of victims through intervention funds and the creation of a North-West Development Commission. It also sought the establishment of Ruga settlements for victims and the completion of the 10 megawatts wind power project in Katsina State.

Fear Not, Security Agencies Have Your Back – Buhari Assures Nigerians

Leave Us Out Of Your Politics And Fake News – Military Warns

FG To Meet Governors Over N30,000 Minimum Wage On Monday

Own A House In Lagos This Christmas