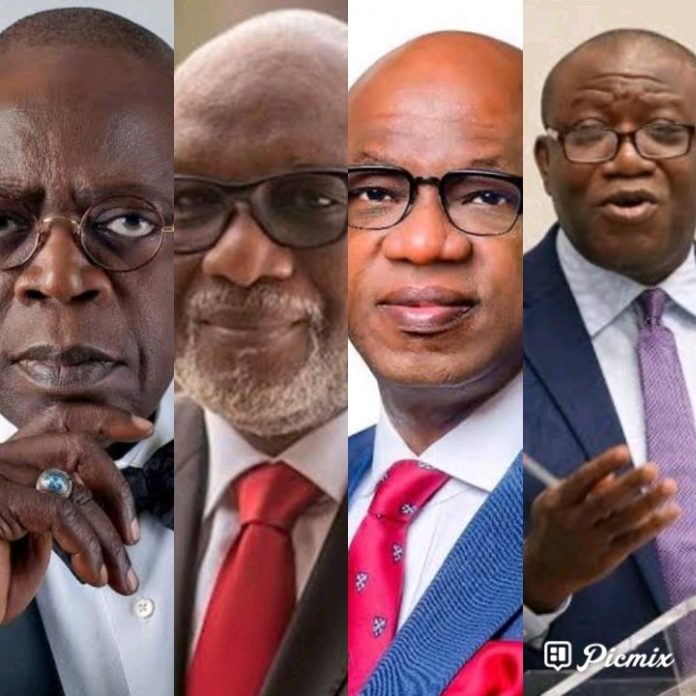 It’s no longer news that Vice President, Yemi Osinbajo has declared to run for the office of the President in 2023, what is however news is the intrigue and drama that has followed the declaration.

One major drama that has trailed Osinbajo’s declaration is that of his political boss, Asiwaju Bola Ahmed who is also another leading aspirant and chieftain of the All Progressive Congress.

Many had thought Osinbajo would not declare, as a sign of loyalty to Tinubu, while some believe, it is his constitutional right to do so.

Earlier today, Tinubu had met Governors of the All Progressive Congress in Abuja, hours after Osinbajo’s Presidential declaration. A move many consider to be a counter move against the candidancy of Yemi Osinbajo.

Immediately after the meeting with the governors, Bola Ahmed Tinubu while granting interview, told reporters, he has no son, grown enough to declare for presidential ambition. In other words, he is not only disowning the Vice President, he is also confirming the former Attorney and Chief Justice of Lagos State, is not his political boy.

Although, this is his first time of serving at the national level, Osinbajo believes his seven years experience as a Vice President is enough for him to lead the most populated black nation, Tinubu on the other hand believes in his close to 30 years of active politics.

After a through look and investigation; Zebra News discovered that, there are some APC governors, that may not be interested in the presidential ambition of Asiwaju, considering his age and other challenging factors!

Below are the three Governors of All Progressive Congress who may decided to declare support for Vice President Yemi Osinbajo based on President Muhammadu Buhari’s influence, this medium also believe other governors may join in the long run.

The Executive governor of Ogun state, Dapo Abiodun is not just on the side of Yemi Osinbajo, he is 100% loyal to President Muhammadu Buhari. A close ally of the governor who pleaded anonymous, told Zebra News that, even though His Excellency was present at the meeting with Asiwaju in Abuja yesterday, he will never support the Presidential ambition of the former Lagos State Governor.

“I am 100% sure Ogun is not part of the APC governor that will endorsed Tinubu and you can take this to the bank. The implication Osinbajo’s declaration might tear ogun politics apart if not well managed. Senator Yayi group/Okedara and former Governor, Gbenga Daniel is for Tinubu. Tejeosho/GNI and also the Governor Dapo Abiodun for Osibanjo”

“The source continued, “The body language of the governor is tilted towards the Vice President, he didn’t and likewise anybody from his core camp attend or support or receive in audience any Tinubu related events in Ogun, include the TSG, TSO and even the SWAGA.”

“But he is almost everything ushering the VP to most events especially all VP’s events in Ogun state. Yayi ogun west senatorial ambition is threatened already bcos he came into Ogun west on Tinubu Support Group/Swaga which might not go down well with the governor while GNI might be more favoured by the Governor withh his launch of Tribe Moverment for Osinbanjo(which is believed in so quarter has the support of the Governor)” the source concluded.

Another state that may not declare 100% support for Asiwaju Bola Ahmed Tinubu is Ekiti State. Although he has earlier indicated interested in becoming the President; it is however unclear if Fayemi is still interested in running for the office of the number one man in the country.

A top political source who spoke with Zebra News said, Fayemi is who is loyal to Buhari will not want to loose the confidence, reposed on him by Aso Rock. The source further confirmed that Fayemi will give all necessary support to Osinbajo, even if it means forfeiting his own personal ambition.

READ ALSO:  Why I Am Contesting For The Office Of Speaker - Femi Gbajabiamila

The whole idea is to dislodge the lion of Bourdillon.

Ondo State Governor, Arakunrin Rotimi Akeredolu is another South West governor who will not now at the feet of Jagaban. It’s a known fact that Tinubu never wanted Akeredolu to be the governor of Ondo State in 2017, Aketi emerged against the backdrop of Tinubu’s anointed candidate in the person of Olusegun Abraham.

Although, Akeredolu has gone to show love and respect to the Asiwaju of Lagos, it’s not certain he will be declaring support for his Presidential ambition. Aketi will rather stand behind Osinbajo, not because of his loyalty to Muhammadu Buhari, perhaps to prove a point to the Jagaban of himself.