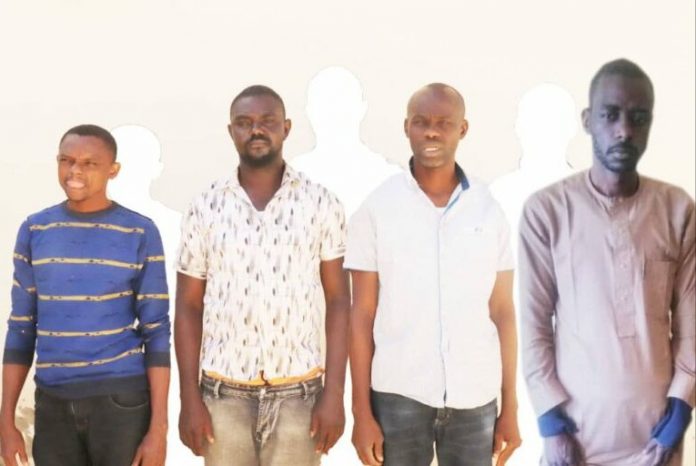 This might cause you some migraine: The Nigeria police force shared photoshopped pictures of arrested crime suspects on Tuesday.

TheCable photo desk confirmed with the use of advanced technology that the pictures, which the police shared via its official handle, have been manipulated.

One was of four persons it said were former inmates who escaped from the Edo prisons: Peter Osas, Onaruje Benjamin, Adebayo Opeyemi and Hudu Musa.

The second one, posted a minute later, was of two persons, Duleji Abubakar and Talatu Ibrahim, who allegedly had six AK-47 rifles in their possession.

But here is the magic: The four men captured in the first picture appear to be posing alongside what might be mistaken to be their ghosts.‘Standing’ behind them were visibly white images, nearly the same height and shape as three of the men.

Forensic analysis, including the error level analysis, also shows that the photo has been manipulated. The second picture shows a man and woman standing behind a table upon which were placed guns, cartridges and bullets.

On a closer look, the items on the table appear to be almost suspended in the air in defiance of the law of gravity.

When TheCable photo desk crosschecked the photos, including with the use of InVID software, it showed the images have been manipulated as both showed various inconsistencies with the original shots.

A screenshot from the results of a forensic analysis conducted by TheCable, shows the photo has been manipulated

Further checks also revealed that the reflection of the female suspect does not appear in the window behind her, while a white background appears from nowhere beside the arm of her male counterpart.

Both spokespersons of the police headquarters and the federal capital territory (FCT) police command did not immediately respond to comments on the issue. But Twitter users tackled the security agency, accusing them of disinformation and misleading Nigerians.

I Am Not Like Obasanjo, All I Seek Is A Second Term – Buhari

How I Impersonates Adeboye, T. B. Joshua, Olukoya To Scam Nigerians...