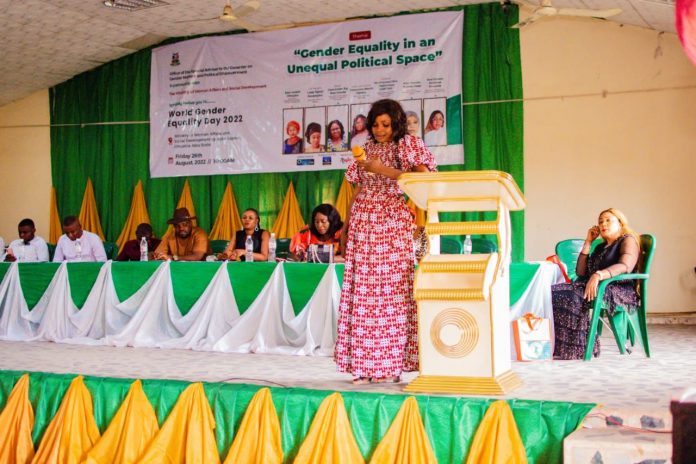 26th August remains remarkable as the Abia State Government held its maiden World Gender Equality day organized by the Office of the Special Adviser to the Abia state Governor on Gender Matters and political Empowerment, Hon. Mrs Francess Olisa – Ogbonnaya(Tabitha) in conjunction with the Ministry of Women Affairs and Social Development.
The event themed “Gender Equality in an Unequal Political Space” took place at the Ministry of Women Affairs and Social Development, Igurube Layout, Umuahia Abia state with many notable dignitaries especially women across the state in attendance.

Speaking at the Opening remarks, the Commissioner for Women Affairs , Deaconess Rose Nna Urenta thanked God for bringing Women across the State in unity whilst thanking the Wife of the Governor, Her Excellency, Nkechi Ikpeazu for carrying Abia women along in the developmental plans of her husband. The commissioner who enjoined Women in politics not to give up on their dreams further thanked the Special Adviser to the Governor on Gender Matters and Political Affairs for coming up with the program initiative.

Speaking at the event also, the State Peoples Democratic Party Woman Leader , Lolo Christy Emenike reaffirmed the readiness of the Party in the state to carry more women along in politics .
The Guest Speaker, His Worship Lady Ngozi Nwangwa, a Magistrate with the Abia State Judiciary commended the organizers of the event and enjoined Women in politics to know their legal rights and don’t allow themselves be cowed. “It’s the constitutional rights of women regardless of your status in the society to vote and be Voted for. Women should know their constitutional rights and stand by them and that men actually respect Women who know their rights”
Other Speakers at the event includes Hon Nnenna Ukeje Elendu, PDP Candidate for Bende Federal Constituency and Hon Barr Loveth Nonye Ofoegbu ,the PDP candidate for Umunneochi/Isikwuato Federal Constituency who urged women not to give up on their political dreams no matter what it seems like.

On her own , the convener of the event and the Special Adviser to the Governor on Gender Matters and Political Empowerment, Hon. Mrs Francess Olisa – Ogbonnaya (TABITHA) thanked His Excellency, Governor Okezie Ikpeazu for making the Maiden edition of the World Gender Equality Day a reality whilst charging women to be actively involved in the decision making process in the state by participating in active politics and should not be intimidated by anything. According to Hon Ogbonnaya, the role of women in the political space can not be overemphasized considering their numbers, values, contacts, personalities and social engagements. She used the occasion to call on all women and girls who are above 18year of age in the state to come out in their numbers to exercise their civic responsibilities by casting their votes for the People’s Democratic Party in the state in the 2023 general elections.
“The erroneous and illusionary believe that women are meant to take care of their homes without being actively involved in politics should be neglected and disregarded as such allusion is only meant to distract women. Women are the bedrock of every decision making processes both in secular and broad society”, she added.

She further thanked Abia state Governor, Dr. Okezie Ikpeazu for the supports and the opportunities given to Abia state women, while appealing to the Governor to give chance to more women to showcase their God given talent in leadership as women are naturally creative leaders.
The event also featured Award presentations decorations of select women and men like Dame Victoria Akanwa who is the Foremost Female legislator in the state , the Speaker of the Abia State House of Assembly, Rt Hon Chinedum Orji and his Deputy, Rt Hon Ifeanyi Uchendu as well as other Great Abia men and Women.

Nigeria-China Loan Deal: It’s None of Your Business – Amaechi Replies...

All Roads Lead to Bamboo Event Center As YMGA 2021 Holds...